So, our day started well – six of us met at Templecombe station, cracked open the champagne on the platform and caught the 9.45 to Reading for the first leg of our train journey to Ascot.

Two stops in (Tisbury) someone laughingly asked if we’d all got our tickets. Mr. H-L and I thought each other was joking when we both said “No”.

This is us after alighting at Tisbury, ready to catch the next train back to Templecombe. Luckily, a friend had a house key and popped in to collect the tickets. She dropped them off at the ticket office for us to save time as we had got a lift to the station and had no means of getting home.

Having caught the next train, we were only an hour behind. Of course, all the food and champagne had gone on ahead with our friends, so we had to try and recreate the excitement with Pringles and Prosecco bought on the train.

We’d opted to travel First Class so it was no problem. We got chatting to a few other race-goers on the two and a half hour journey and two changes of train. 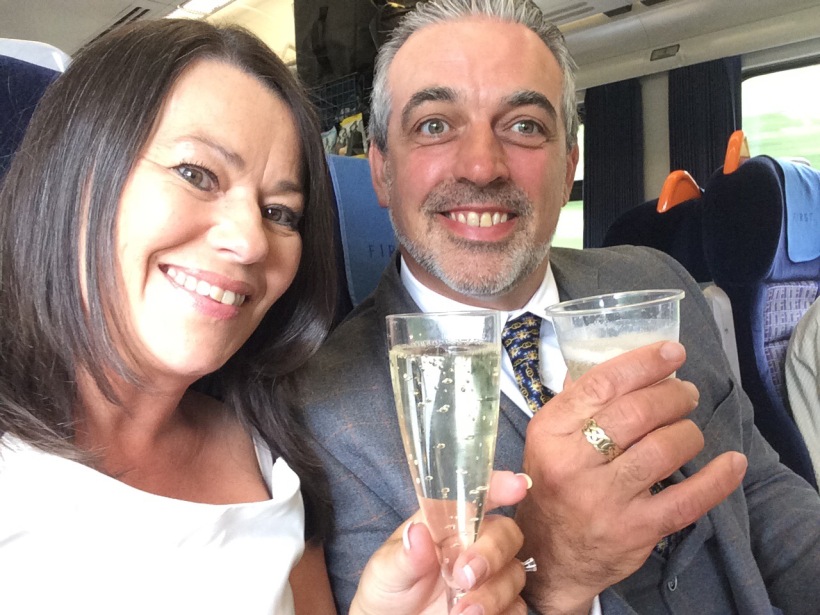 And at least we’d got our tickets!!

Safely in by 1pm, we had time for proper bubbly before the Royal Procession at 2 o’clock. 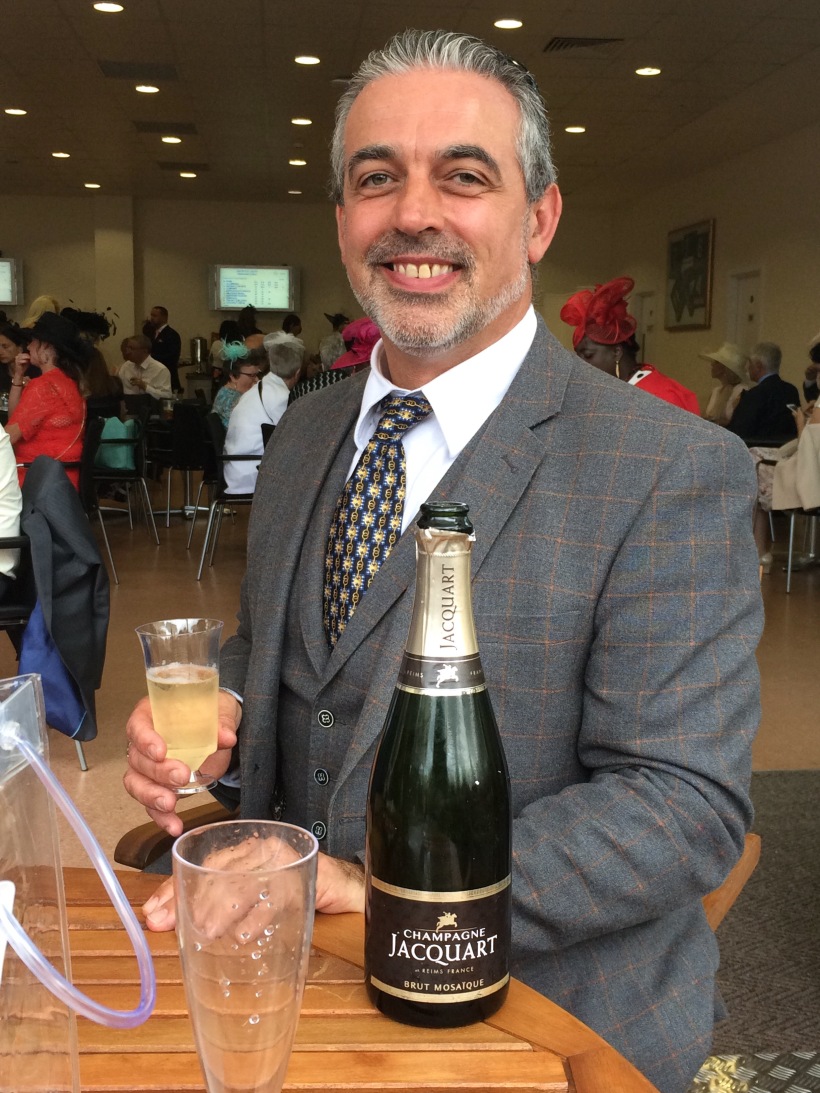 Bubbles were flowing like a river and everyone was having a great time, gearing up to the first race at 2.30. 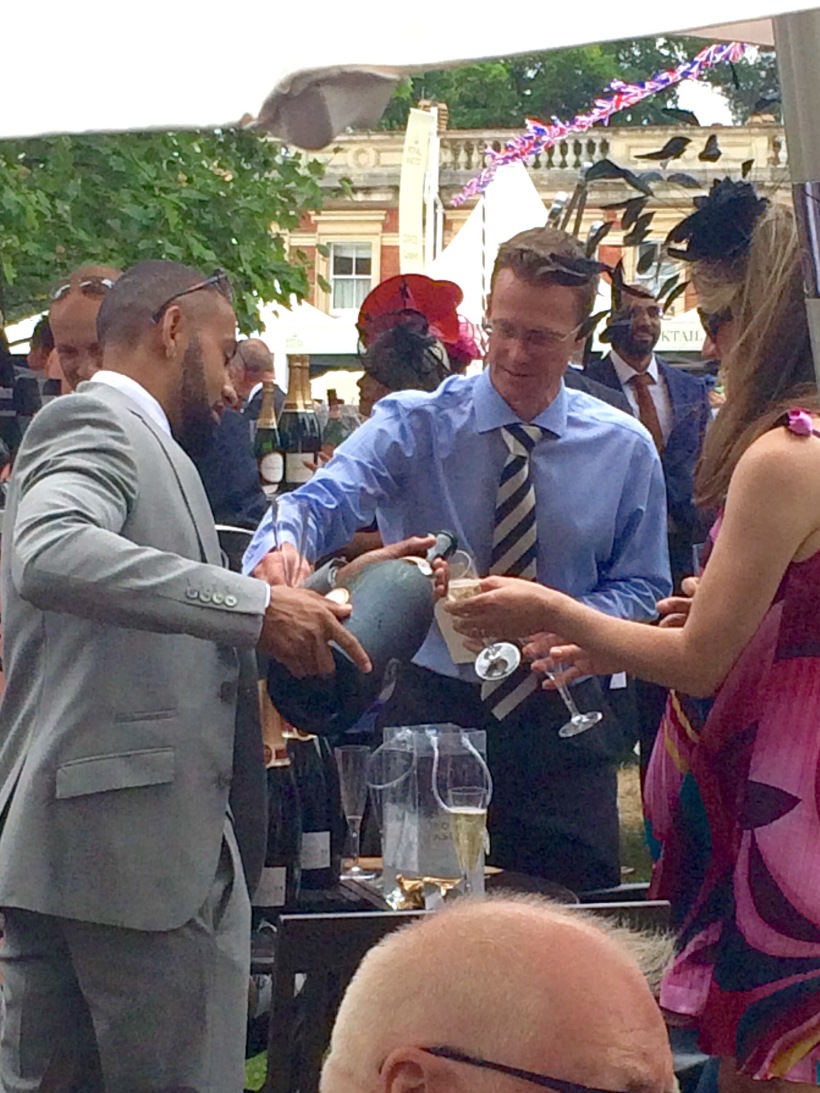 We ambled over to the parade ring in time to watch the Royal Carriages arrive. Queenie looked radiant in cerise, although Prince Phillip was too ill to accompany her this year so Prince Andrew is sat next to her. 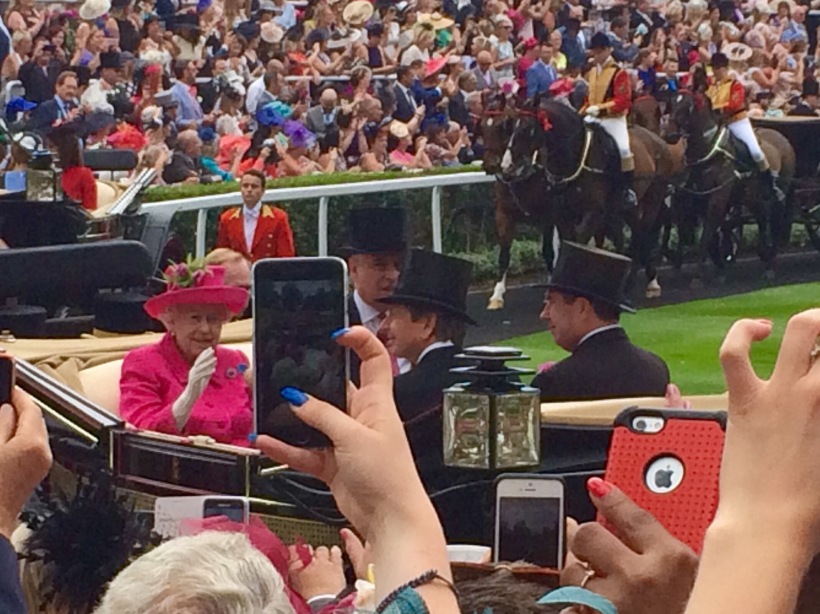 And then the action began!

We had our race card and picked this patriotic-looking bookie with which to place our bets.

We won some, we lost some. The viewing is great despite the thousands of people as the huge screen means you don’t miss a thing, which is otherwise possible despite the horses thundering past just a few yards away as the photo below illustrates. 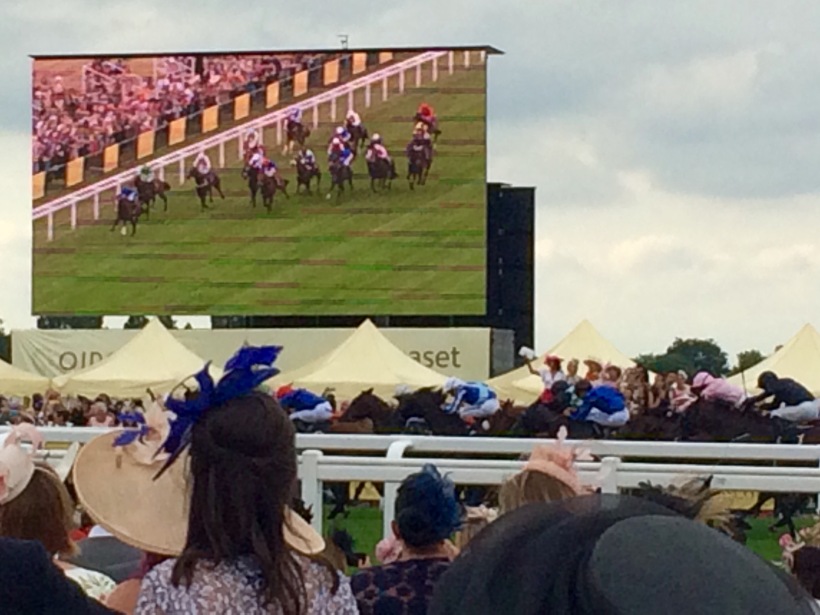 On to the fashions of the day. Our party of six scrubbed up pretty well, I think.

These are two close friends who feature a lot on the blog.

Another friend who joined us for the first time this year.

Lovely Ruth from the USA was in England for just a week and her first day coincided with Royal Ascot, an event that was on her bucket list – AND she even got to see the Queen! She was one happy American!

And, of course, you’ve already seen pictures of The Mister and Me.

Dress codes are slightly less formal in the Queen Anne Enclosure, but there were plenty of gents still choosing top hat and tails.

Yes, that is a man touting Stella Artois by the pint in a barrel on his back. 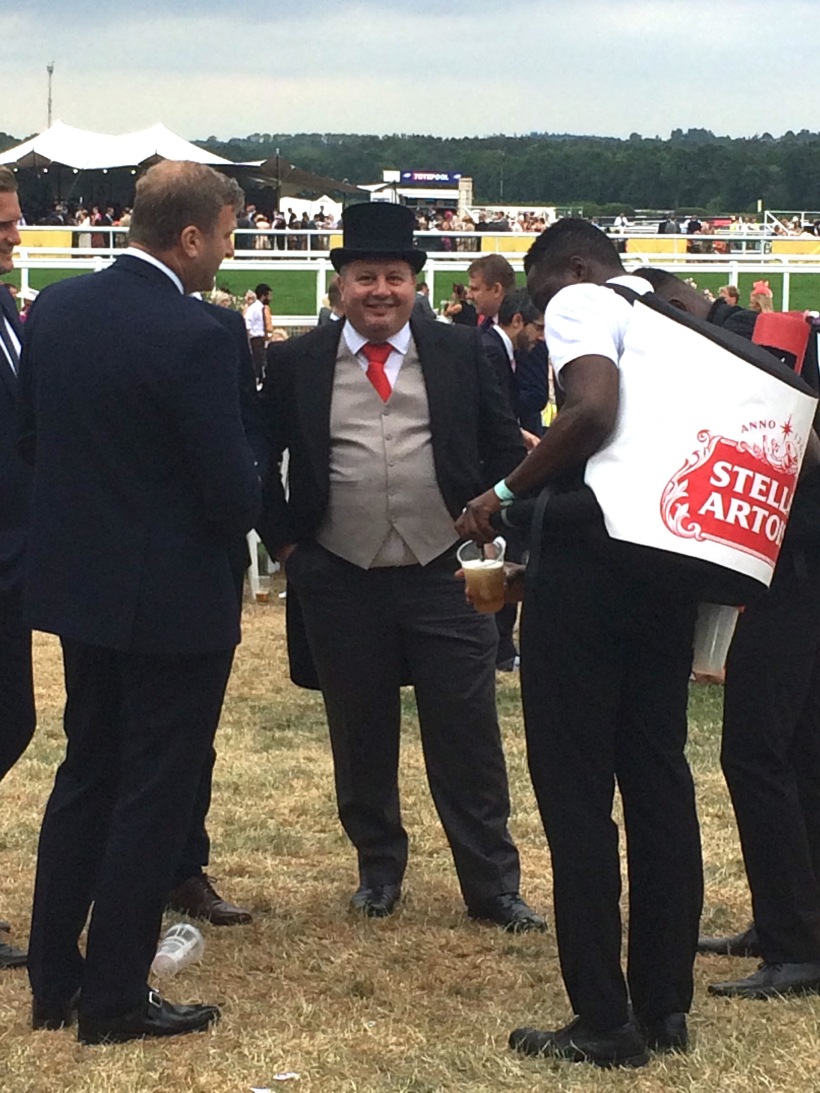 Three piece suits seemed to be the most popular mens’ attire by far, and there were a surprising number of different looks.

How about this bright red one, scarlet right down to the matching shoes and trilby! 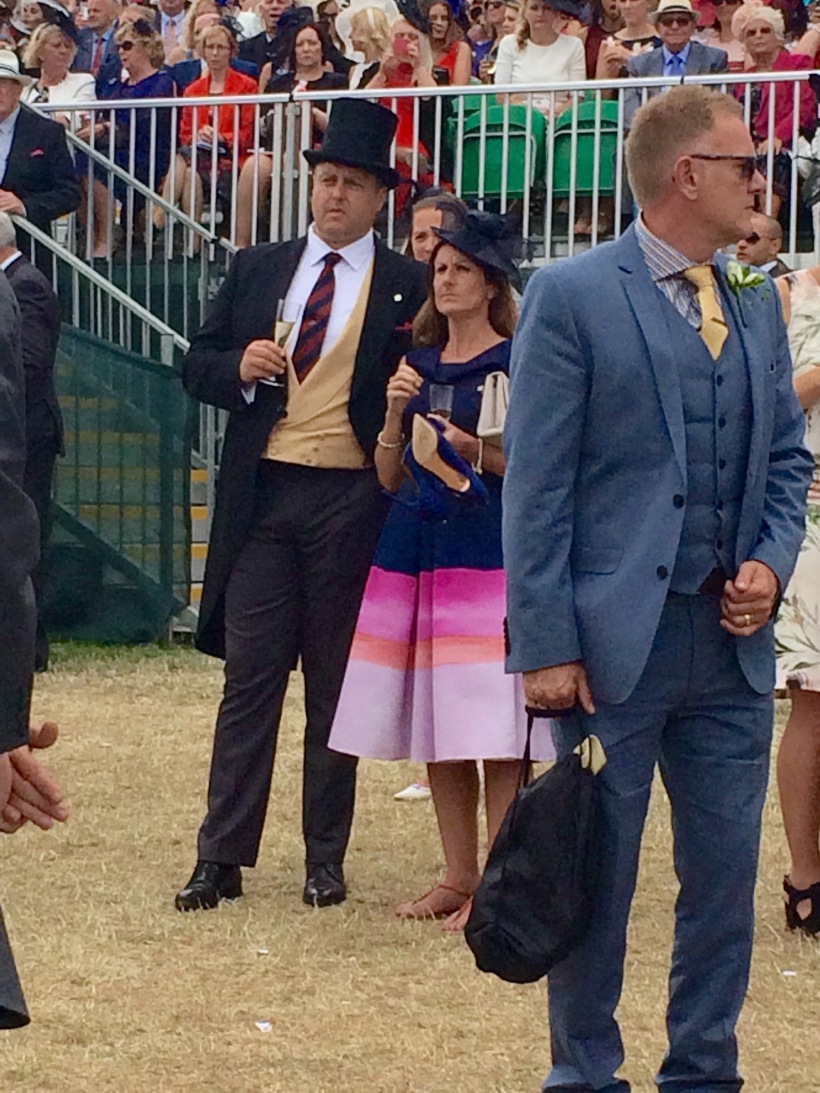 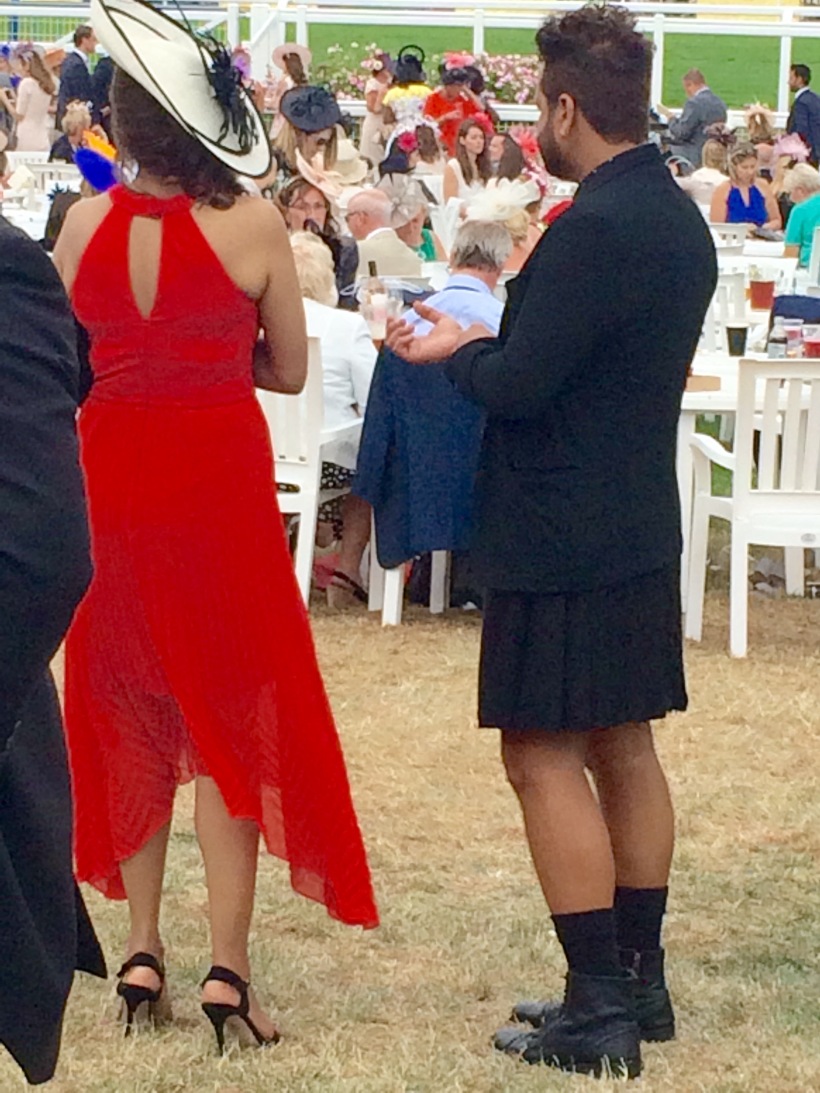 As for the ladies, hmmm.

A few got it very right and embraced the elegant, classy look that Ascot is famous for. 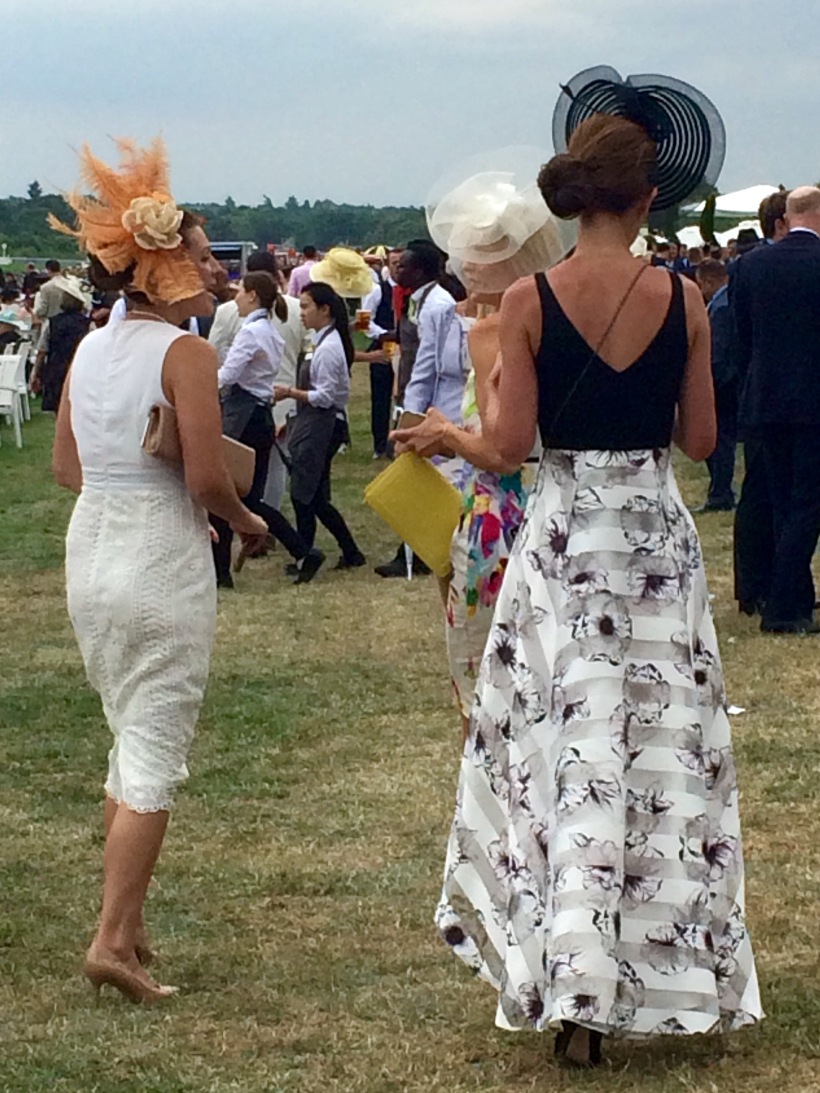 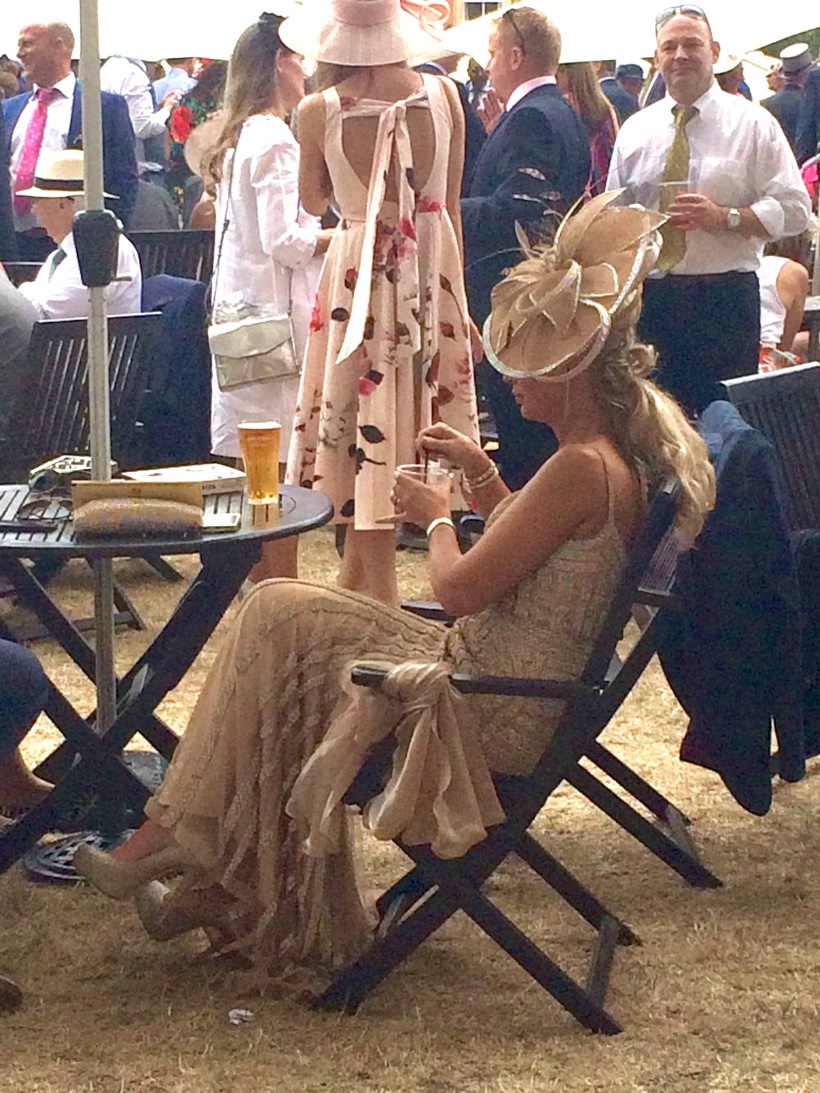 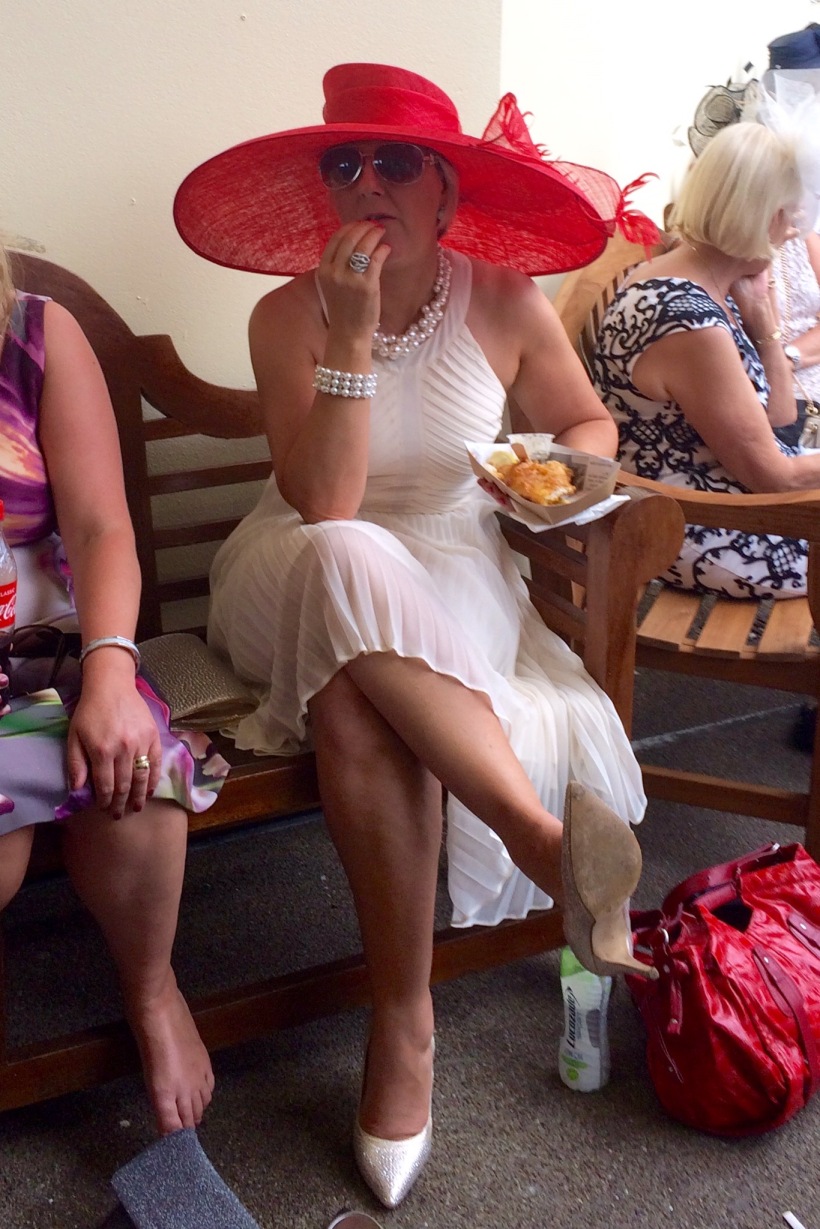 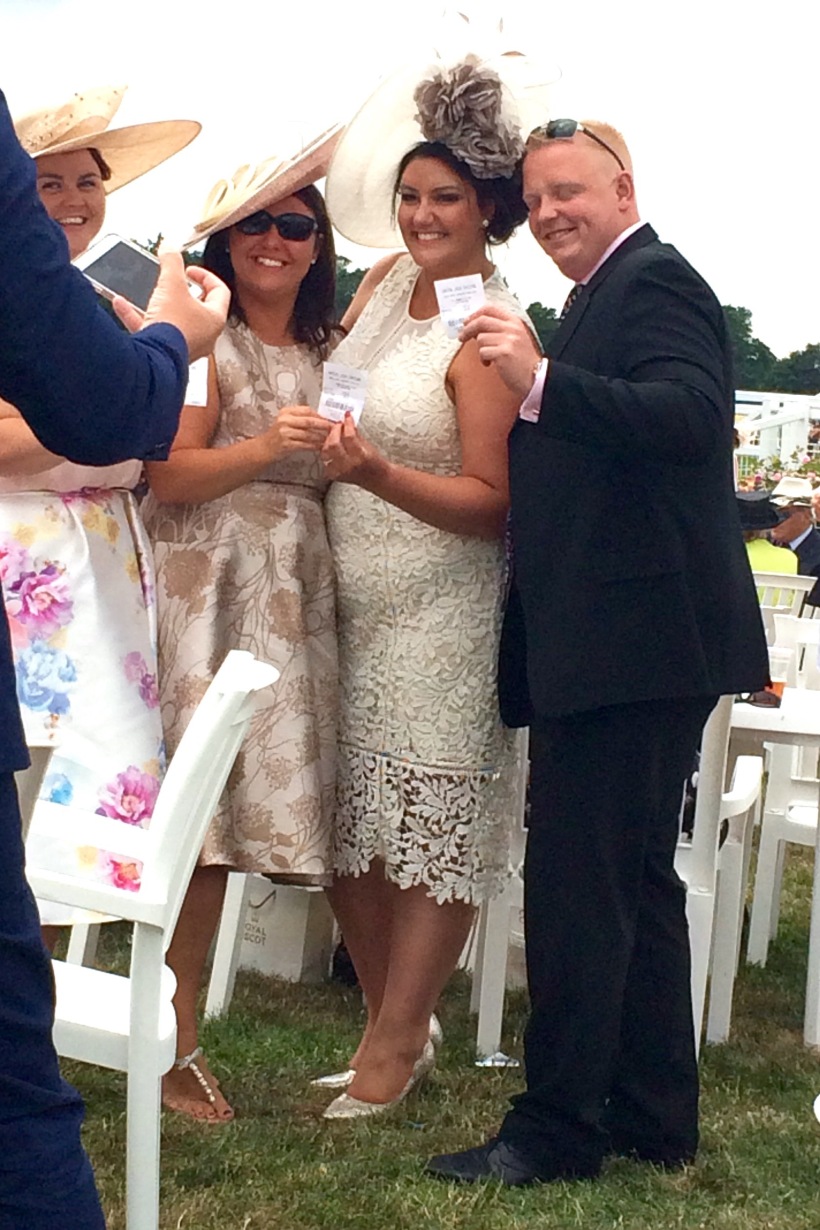 A lot more were almost there, but missed the fact that hemlines should ideally be knee length or lower.

Some girls thought bodycon Lycra was an appropriate choice!

But, unfortunately, there were far too many girls in their early twenties who just didn’t get it. I couldn’t bring myself to photograph them, but this press photo from Aintree races gives you the gist. More like “Barbie Goes To The Races”. 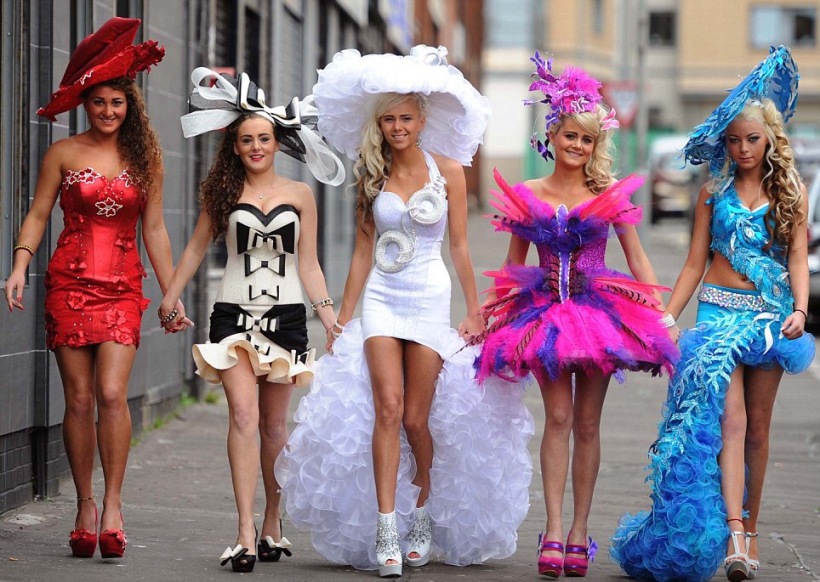 The hats were incredible as usual. 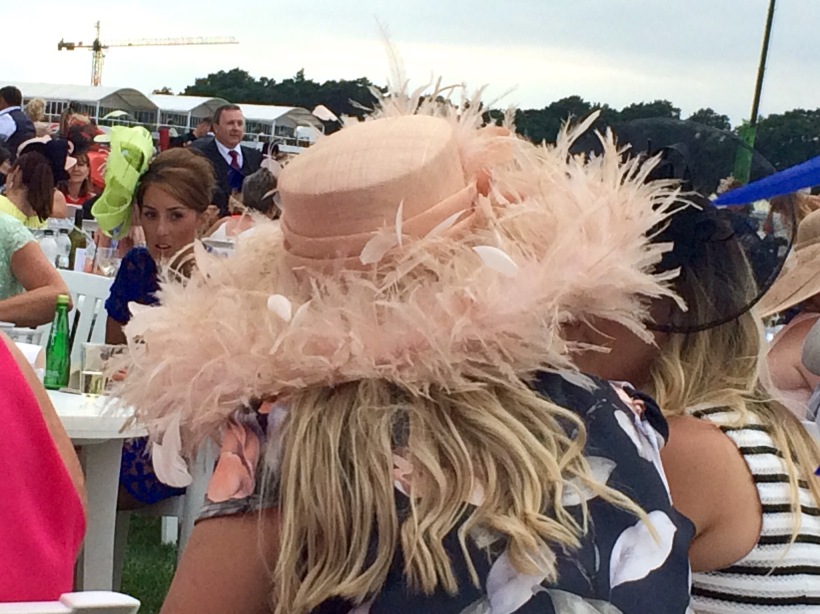 Although not my thing, fascinators were a very popular choice with many ladies. A massive hat wins every time for me:) 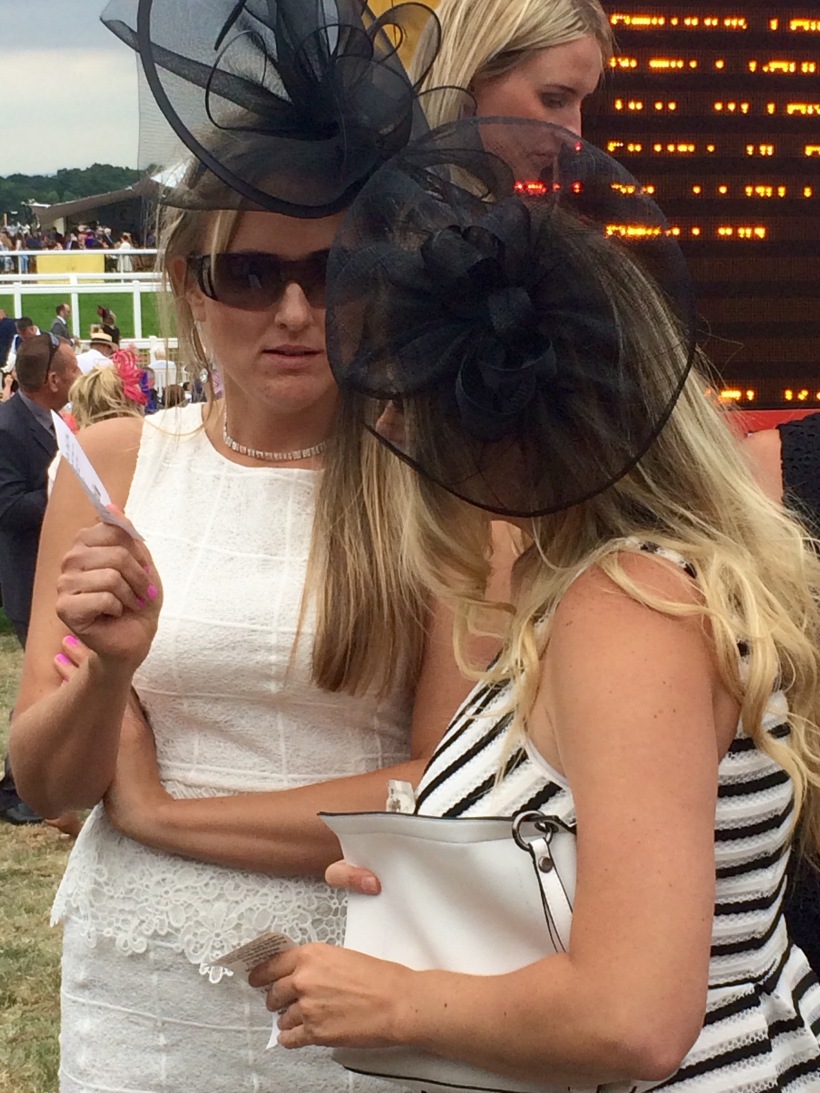 The six races were over all too soon, then it was off to do the traditional singing around the bandstand at 6pm.

​​
Just time to nip into the shop before heading back to the train. 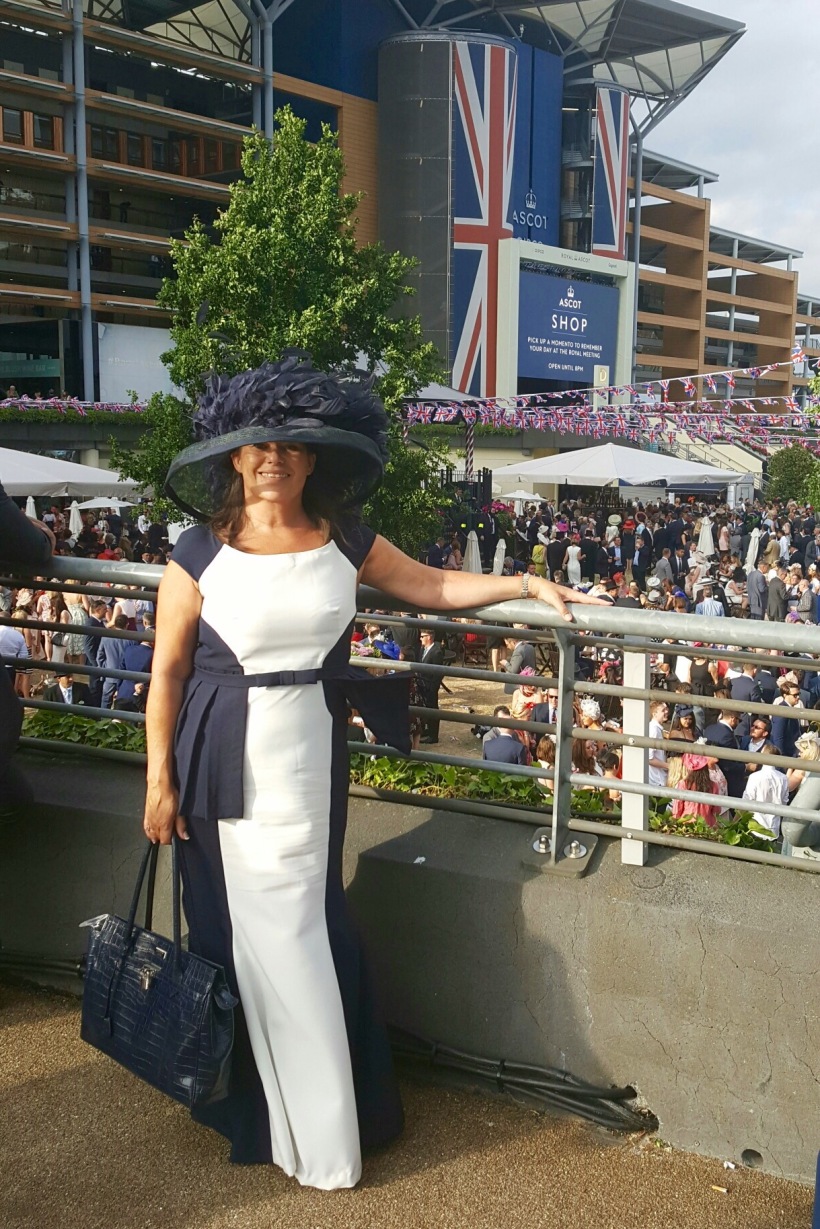 There was even a mobile seller with Cuban cigars.

The fifteen minute walk back to the station saw the majority of ladies in flip flops, hobbling after a day in ill-fitting-but-gorgeous shoes. Not me – I kept mine on all the way home!

First Class was full to bursting on the return journey, but we were fortunate enough to get seats on all three changes of train.

On this leg, the carriage was silent until The Mister pipes up at the top of his voice “SWEET CAR-O-LINE….!” And the rest of the carriage finished it with “…..Bah, bah, bah!” What followed was a spontaneous rendition of all the other songs that had just been sung around the bandstand that continued until the next change of train – great finish to a fabulous day!! 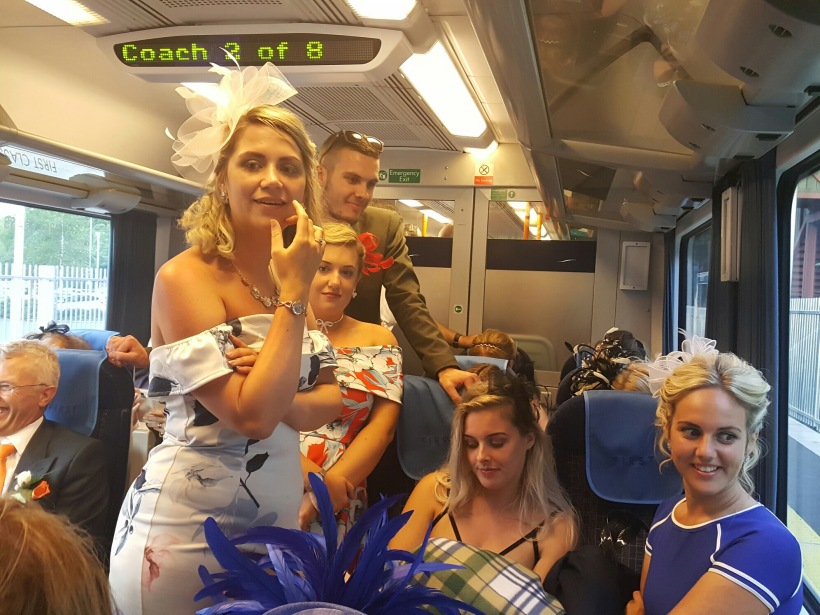 I’m already thinking about next year’s dress – we’re going to upgrade to fine dining so an even posher dress could be on the cards.