We made a conscious decision to spend as much time as possible together after Mr H-L was ill a few years ago, and going away for our wedding anniversary every year is part of that. This year, we chose to stay in England and booked Wilton Court in Ross-On-Wye, close to the Welsh border, a five star Elizabethan hotel dating from 1500.

Being a good husband, Mr H-L insisted on the best room, so this was our bedroom for three nights. All low beams and creaky floorboards, it was lovely and cosy and very hard to force yourself out of bed in the mornings – good job breakfast was served until 10am! 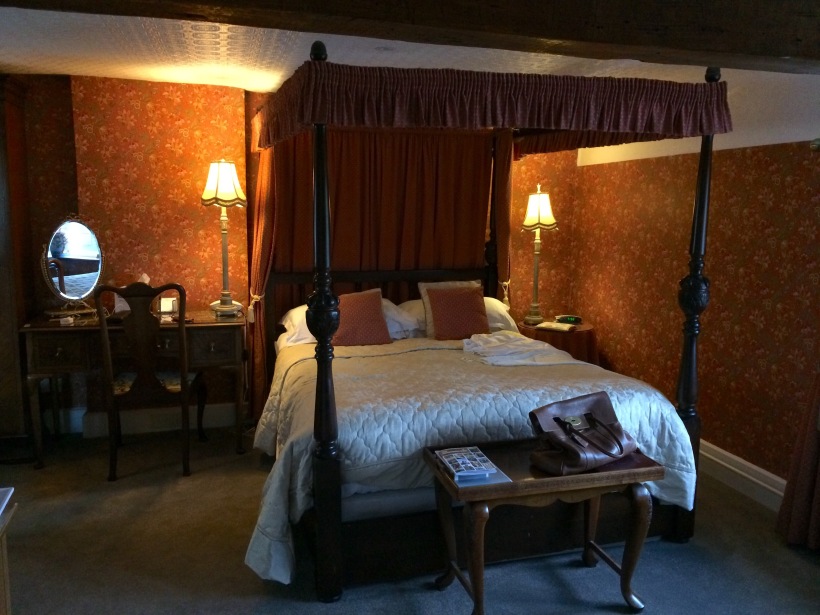 Situated right on the banks of the River Wye, the views from our room were breathtaking. Watching a pair of swans fly in and glide on to the water in absolute synchronisation was a treat. That’s out hotel, just right of centre.

A bit of a grainy mirror selfie on our first night, but you get the idea. We made it even more special by dressing up to the nines every night for dinner – I actually took three different frocks so I didn’t have to wear the same one twice! 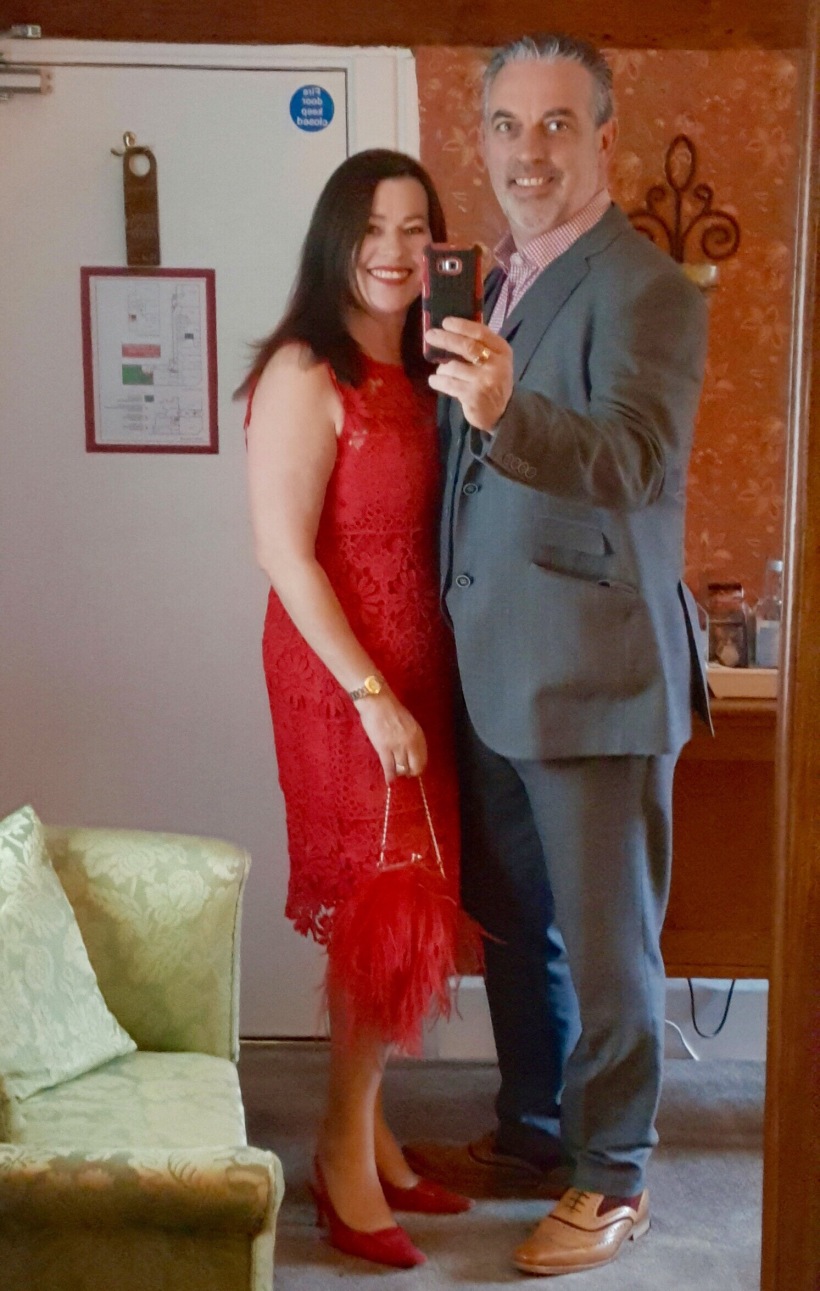 Suffice to say that the food was incredible – here are a couple of the starters, just two of the many dishes we devoured over the course of three days.

Mr H-L’s shirt matched the flowers at breakfast the next morning.

We decided to leave the car at the hotel and explore on foot after breakfast. It was just a twenty minute walk into Ross-on-Wye and, luckily, the rain held off all day for us.

This notice made me laugh – not much of a display to boast about at the moment as the flowerbeds were totally empty!

How’s this for a tiny front garden to make you look twice? Pink cushions and matching pink gravel.

There is lots of interesting architecture in Ross, if that floats your boat like it does mine. All fascinating stuff – and this pub had a huge piece of art outside the front in the form of a fish sculpture.

No, not the crumbling walls of ancient city walls at all – this was built in the 19th century to look like ruins! 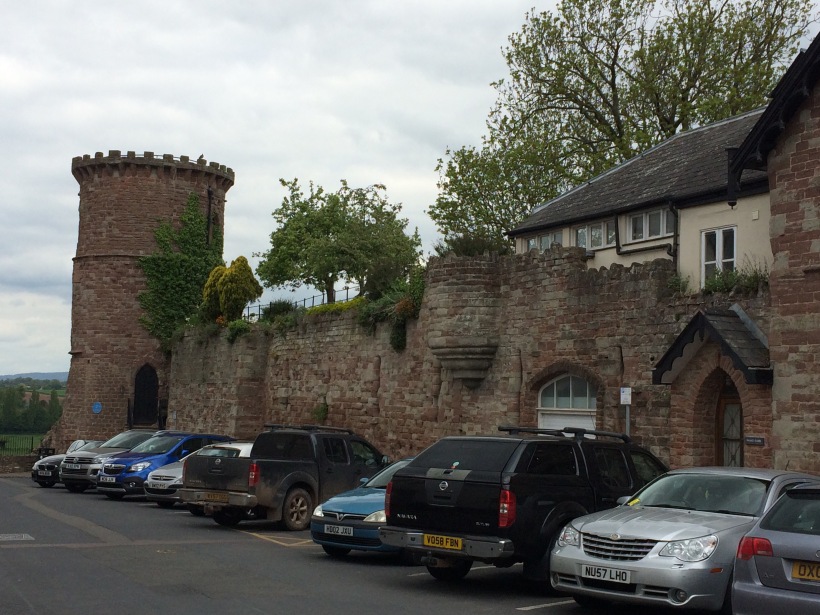 If you like browsing through antique and vintage shops, you’d love the ones in Ross. ‘Elizabethan House Antiques’ was the perfect building in which to house antiques, being over 500 years old itself.

Yep, that’s me about to go inside as the Mister quickly hides his wallet.

On the first floor, the floors and walls were all over the place. Can you see how the window is leaning out? It’s not just the camera making it look that wonky – it really does lean that far from upright. 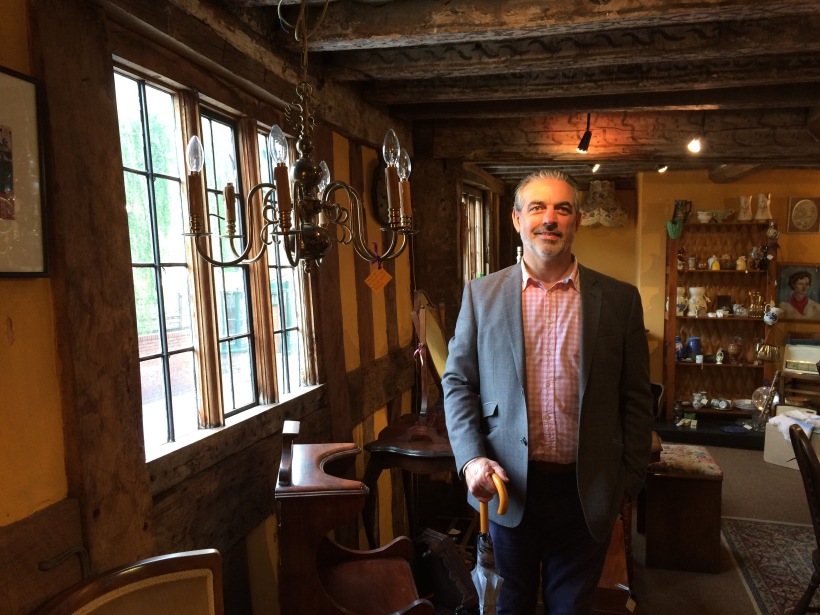 A glass of fizz and a prawn cocktail at ‘The Royal‘ was all we dared eat for lunch, knowing that we would be having three courses for supper.

Relaxing in the library back at the hotel. It’s a small room with not much natural light, but doesn’t the black make it feel cosy as opposed to gloomy?

Champagne and canapés before dinner. Well, there were canapés, but we’d eaten them at this point!

The following day Mr H-L drove us forty minutes to the other side of the county to visit the Chase Distillery as he’s a fan of their gins and vodkas. It was a Sunday and he hadn’t rung to see if they were open. So we headed to Hay-on-Wye instead, a town we’d been planning on visiting anyway. Of course, we had to sample the cider and fizz in a local pub, as well as the pork scratchings! 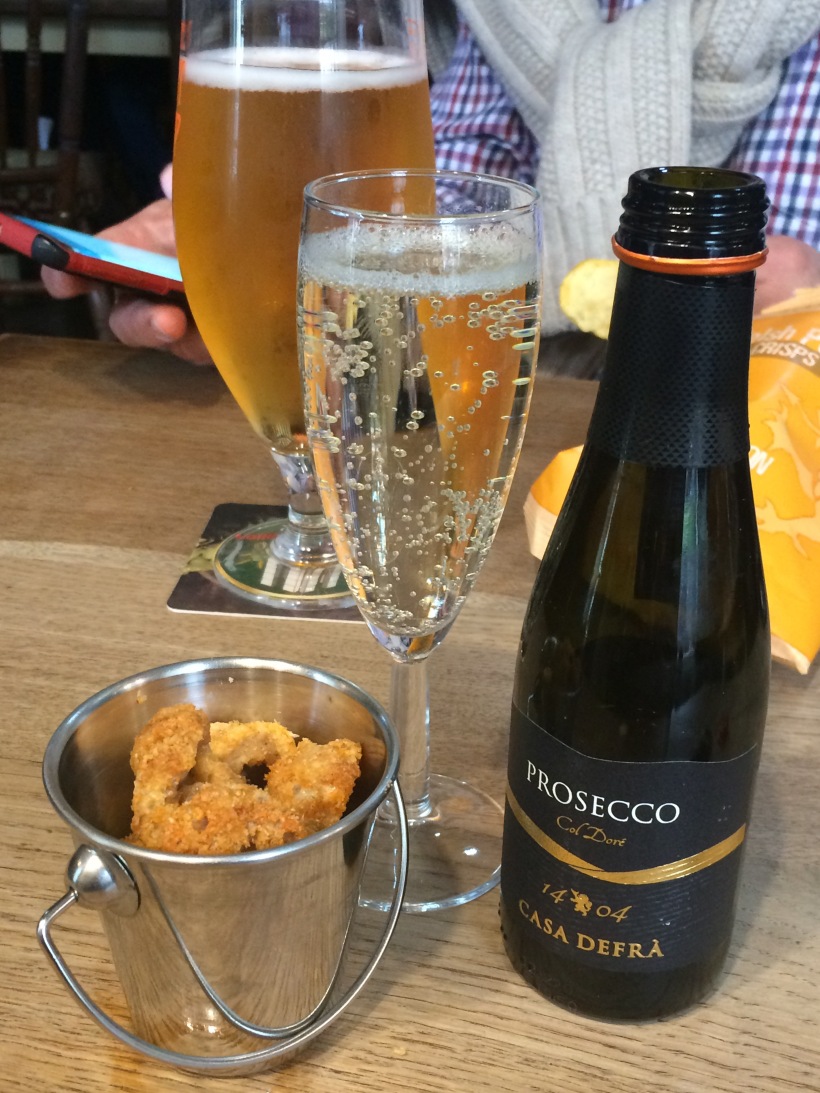 As we’d saved ourselves for dinner again by not having lunch, we were ready to demolish all that was laid in front of us that evening, including these five local cheeses.

A record, even for us, to each have five different drinks on the go at the same time!!

Heading back on Bank Holiday Monday, we took the scenic route following the River Wye and stopped to explore Tintern Castle, which is actually ancient monastic ruins dating from around 1100.

In order to delay going home for as long as possible, we picked The Boys up and took them out for lunch with the family.

This was just a starter!!

No, I’m not bored of champagne yet:) 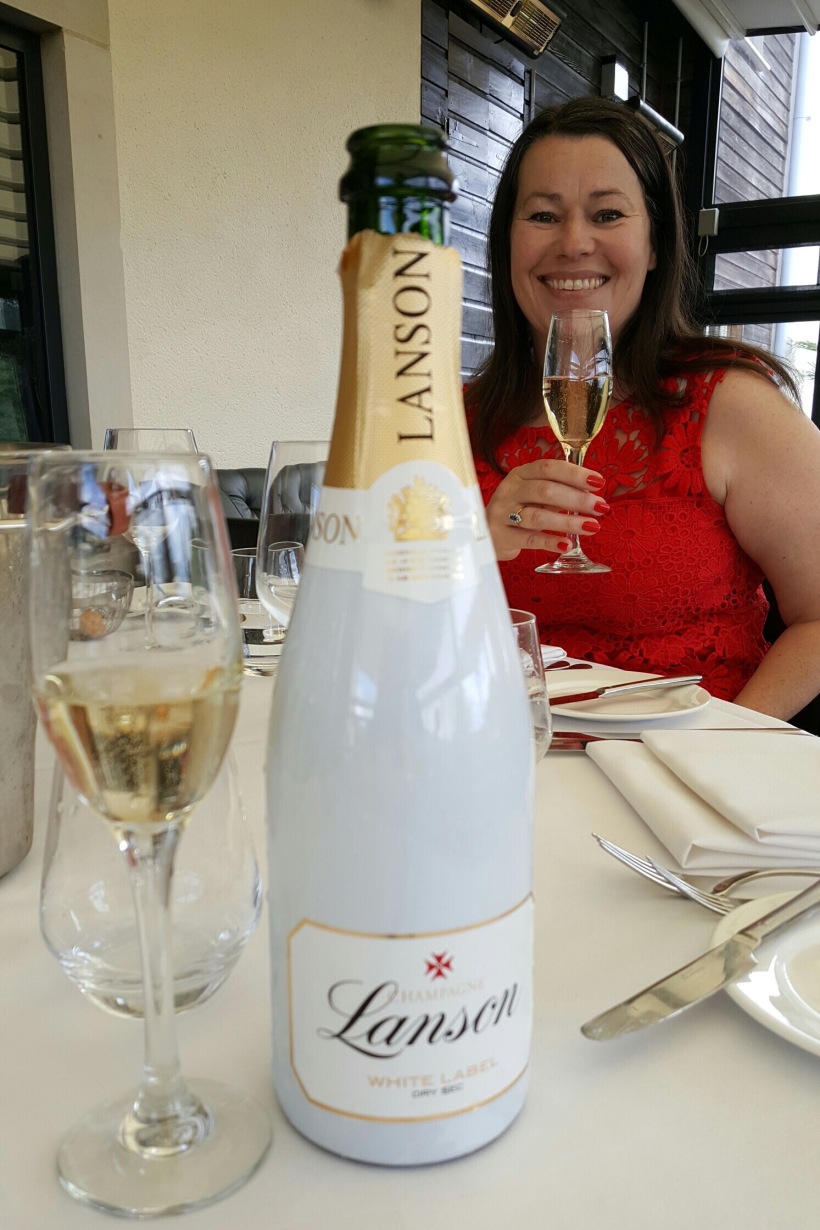 Finally, it was back to normality on Tuesday…….but just for a day!

Our actual wedding anniversary was on Wednesday, so Mr H-L insisted on taking me out to Holbrook House for lunch on the day itself.

My red dress has been out a lot this past week. 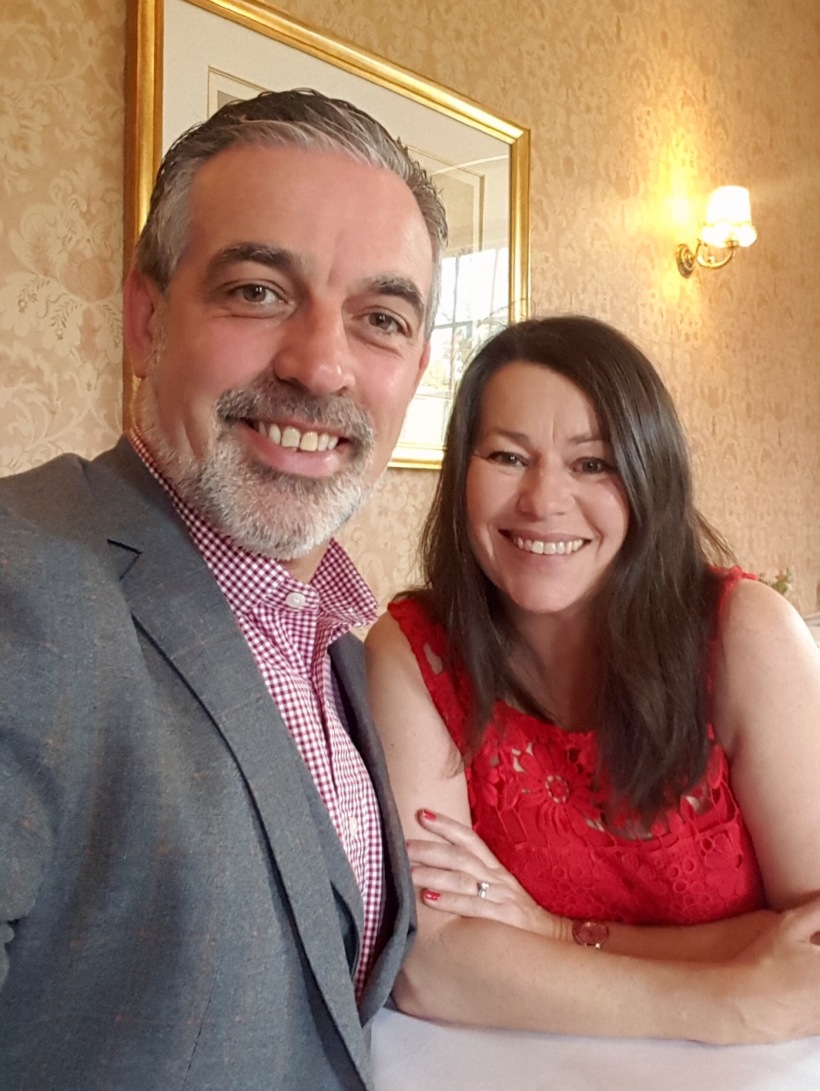 More amazing food and a wonderful way to end a fantastic few days.

Or so I thought, until we got back home to find these on the doorstep.

I assumed they were from the husband, but it turns out he was as surprised as me to see them sitting there.

On reading the card, we found out that they were sent by the jewellers from which my darling hubby had bought me an incredible anniversary present.

If you love watches, then you’ll know what was inside this iconic green box.

I’m one lucky lady, that’s for sure!!