Forgive me, Bloggers, for I have sinned – it’s been a week since my last blog post….but with good reason.

I had faithfully recorded images of my week for #sundaysevens (including some lovely Spanish sunsets) but could not share them with you…yet. It is in the gadget hospital as we speak so, hopefully, the techy bloke will work his magic and retrieve some of the lost photos for a later post.

As you know, we recently hopped over to Andalucia in Spain for a couple of weeks to stay with my Auntie and her partner.

This is Auntie, looking very glamorous and stylish. Not your average ex-pat, I think you’ll agree.

Boy, do I hope I’ve inherited her genes – hardly a grey hair in sight and she’s seventy-six this year! 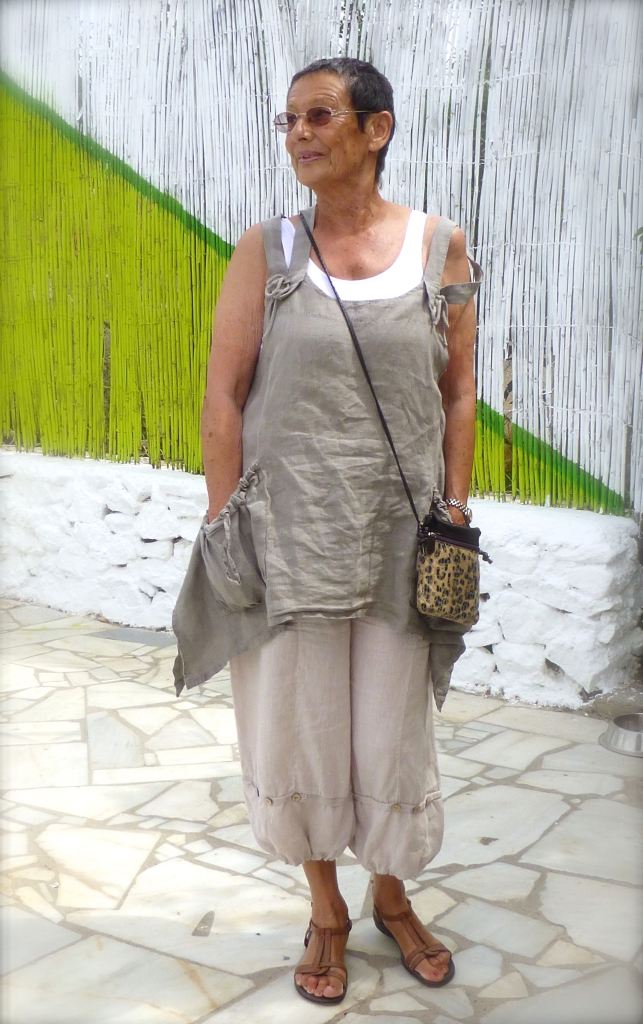 Auntie wears a lot of linen.

With temperatures well into the high thirties in the height of Summer, it’s the coolest and most comfortable fabric to wear, after all, you can’t walk around naked all the time, can you?

Having long admired this style of clothing, I persuaded Auntie to take me to the Tuesday market in Albox (photo amongst the many lost in the depths of my iPhone) to buy something similar in an effort to keep cool in the blistering heat.

Apparently, it was a balmy 26°C and pleasantly cool for the locals.

I was sweating my t**ts off.

You’re talking to someone who gets the shorts and flip-flops out as soon as the thermometer reaches double figures for seven days in a row:)

The Boys stayed at home frolicking in the pool for the morning whilst we spent a blissful few hours wandering around the market, stopping occasionally for Tapas and the odd chilled beer.

The remainder of our holiday was enjoyed in cool, linen comfort and I vowed to make more things in this magical fabric on our return to England.

The wonders of online shopping resulted in this little lot being delivered within a few days of arriving home.

As I wasn’t entirely sure what I was going to actually make yet, I bought three metres of each which would be plenty for any single garment.

At £8.99 per metre, it is much cheaper than pure linen with the added bonus that it shouldn’t crease quite as much.

After having a mooch around online, I settled on this pattern by Lynn Mizono for Vogue.

I love Vogue patterns, especially the ‘Designer’ range, as you’re always guaranteed to find something a bit different to the norm, which I like.

Whilst linen wasn’t on the list of suggested fabrics, silk dupioni was and, as they are similar in weight and characteristics, I knew it would be perfect for this design.

Described as a “very loose fitting pullover dress……with three adjustable lengths”, it seemed ideal for the look I was after – something cool and comfortable to move around easily in, yet still stylish enough to make it look as if I’ve made an effort when clearly I haven’t.

Then I realised I’d made a silly mistake – I’d ordered a size 14 forgetting that the US equivalent is a size 18!

I added a couple of inches to the bustline and lowered the shoulder seams by half an inch – problem solved.

Construction was simple – just two pattern pieces; a front and a back.

French seams were used throughout, making the seams nice and tidy with absolutely NO chance of fraying – a real problem with linen.

Narrow hems finished off the neck and armhole edges beautifully.

This finish can be tricky in other fabrics but, with linen, it’s very easy as the loose weave makes for a flexible fabric.

I didn’t even bother pressing under the seam allowance first, just folded and pushed under the raw edge with my fingernail as I went. 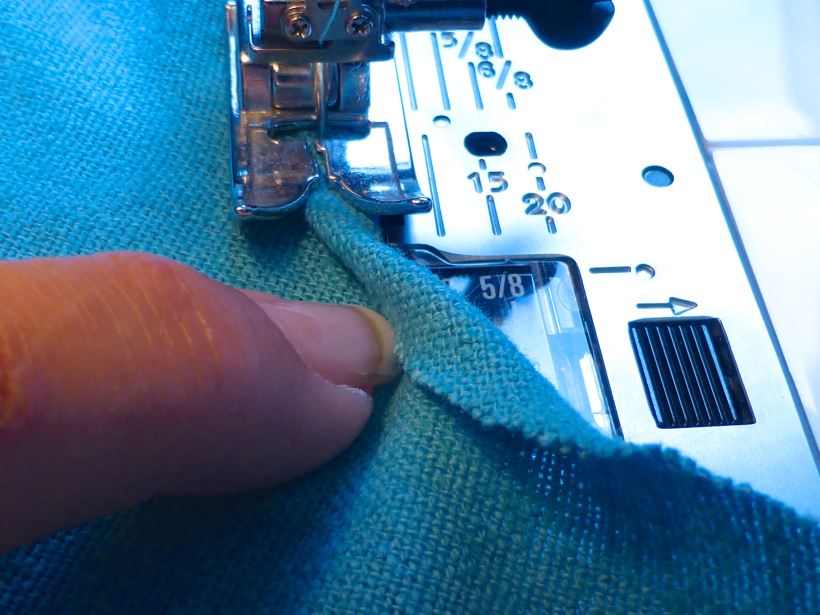 The instructions called for two buttonholes in the front pleats for the cord to pass through, but I replaced these with eyelets as I thought they would look neater and place less stress on the linen. 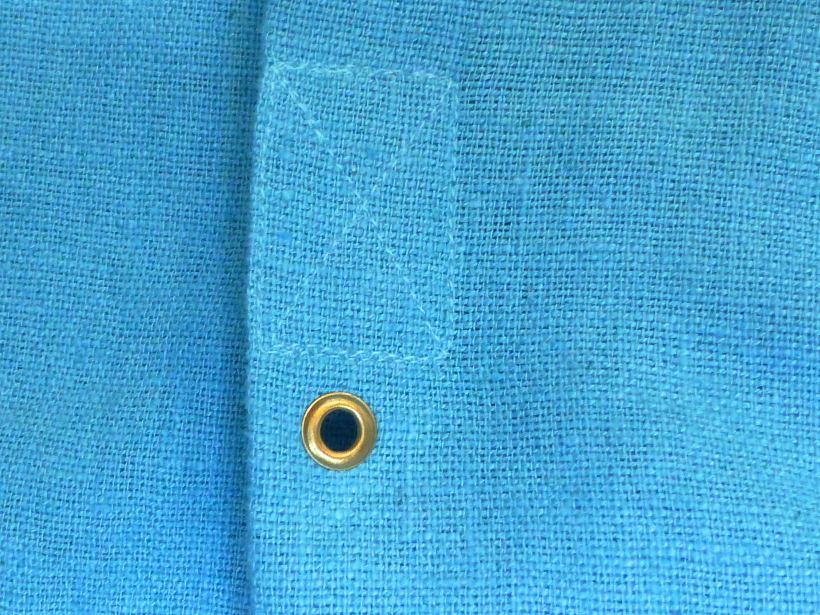 I only had a lime green cord stop left over from the pack purchased when making this crocheted back pack.

Hmmm…..I’m not sure whether to change if for a brown one.

There were a couple of things I wasn’t happy with – the armholes gaped a little so I added a dart each side for a better fit. 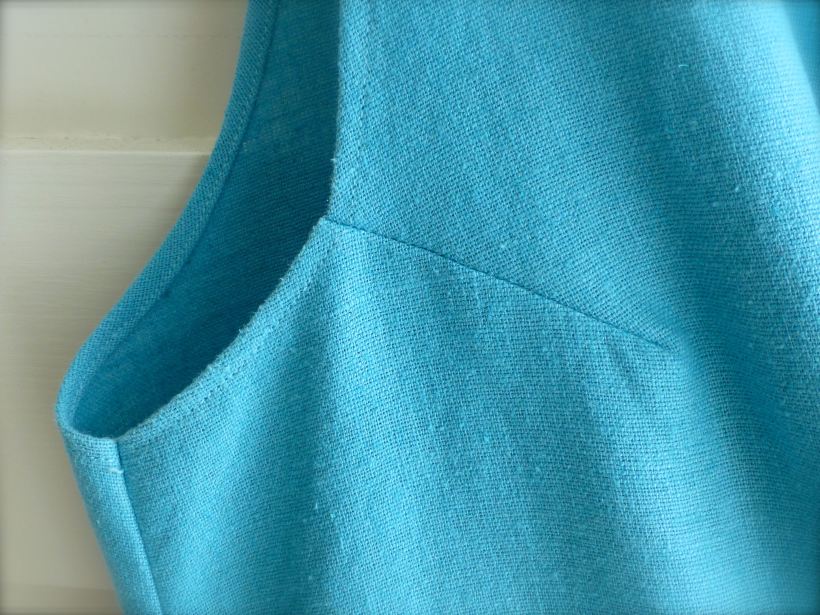 The back pleats are left ‘hanging’ according to the instructions.

I’m wondering if they would look better stitched flat against the body.

Overall, though, the finished dress is just as I pictured it.

An interesting shape, casual but quite stylish.

I bought these gorgeous clogs in another Spanish market a few years ago. 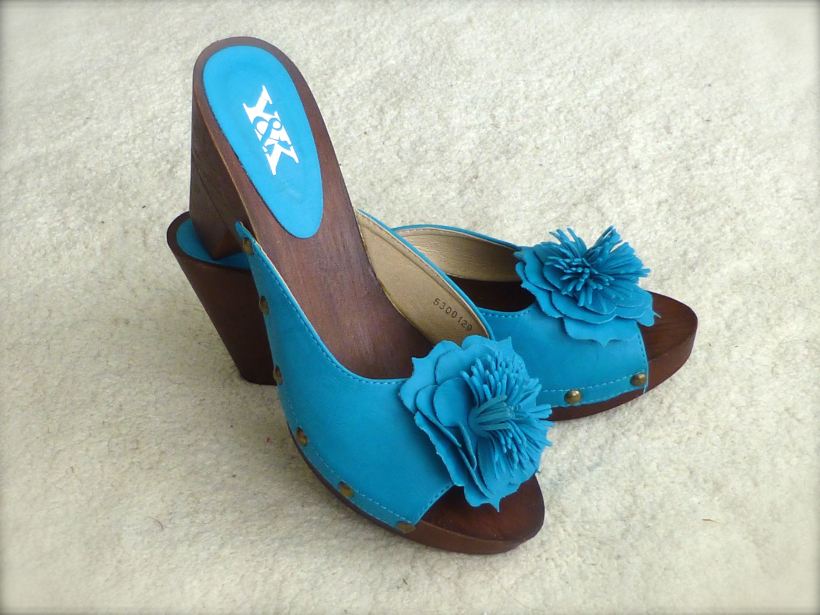 The perfect shade of turquoise that matches exactly!

Of course, I forgot to put them on for the obligatory selfie….

It’s pretty versatile, too – I reckon it could be dressed up for the evening with those clogs, a statement necklace and an up-do, or teamed with flip-flops, floppy hat and shades for a day at the beach (perish the thought – I hate sand!).

Right, now to catch up on all your blog posts that I’ve missed since the ‘phone died.

Better settle down and get comfy with a G&T – could be here a while….:)