So this week’s Sunday Sevens focuses on the four days we had in London for our anniversary weekend. In common with many of you probably, it featured lots of good food and drink as we both fall in the ‘live to eat’ camp.

We also walked miles, despite having bought travel cards for each day as you see so much more by foot rather than going everywhere by tube.

Visit Nat at Threads & Bobbins to learn more about Sunday Sevens – anyone can join in.

1. We travelled up in time for lunch as guests at the members-only London Capital Club on the first day. Three lovely courses with aperitifs, wine, champagne and digestifs. Lunch started at 12.30 and we thought we’d have plenty of time to spare before our evening concert at 7pm.

2. We left the club at ten to seven and ran all the way to St Martins In The Field where we were allowed to creep in quietly as the concert had already started.

The Thames Chamber Orchestra were playing Mozart’s Jupiter Symphony by candlelight which was magical.

3. We walked all the way back to Waterloo station via the Millenium Bridge, taking in a few sights by night and stopping in a bar before catching the last train back to the flat. For those outside the UK, you can just spot Big Ben at the top right. 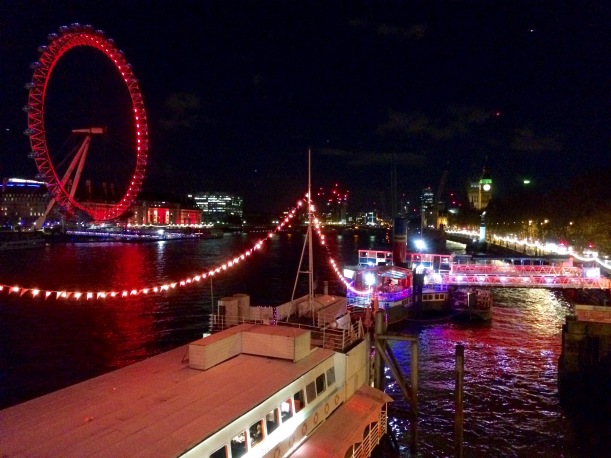 4. Believe it or not, I’ve never actually been inside St Paul’s Cathedral before so we decided to go the whole hog and get tickets to the dome as well.

5. Over 500 steps later and we were rewarded with this panoramic view of the London skyline. Our knees weren’t quite the same for the rest of our break!

6. Our legs still wobbly from climbing all those steps, we hopped on a tube to get to Claridge’s in time for dinner.

7. The perfect evening which included Chateaubriand and more champagne. No wonder he’s got a smile on his face:) 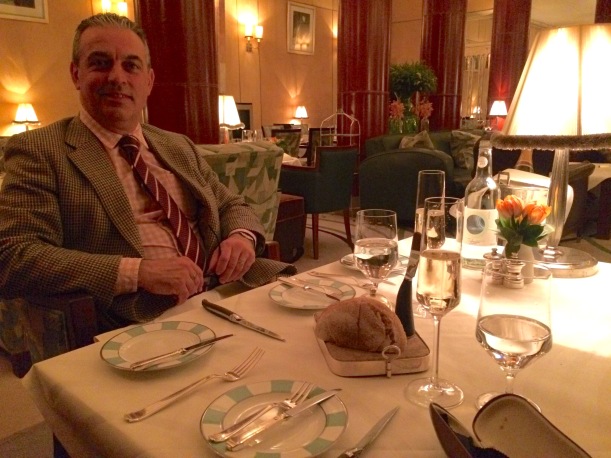 9. The following day and a trip to Liberty of London was top of my list.

10. I managed to kill two hours on the fabric floor alone whilst Mr H-L amused himself doing……..actually, I have no idea what he did for two hours. 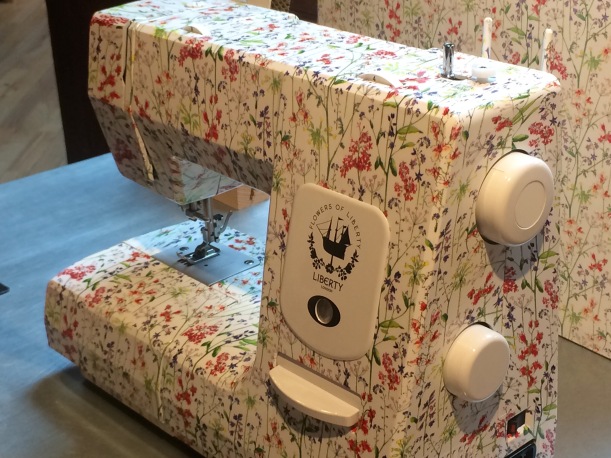 11. Luckily, it was just a few steps to the pub next door where I sat down and stroked my purchases whilst enjoying a gin and tonic.

12. Two metres of ‘Lilac’ in the red colour way is destined to become a Summer dress, and the Art Deco print may well become a hexagonal sewing box for myself. 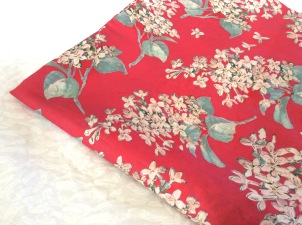 13. Here’s the pub shot for those of you who missed it last week, Mr H-L  propping up the bar.

14. We wandered through the backstreets and happened upon Carnaby Street which is not the hip place it was in its Sixties heyday.

15. I just ‘popped’ in to another fabric shop that we stumbled upon and, half an hour later, came out with this amazing silk viscose lightweight velvet. A Summer jacket perhaps? 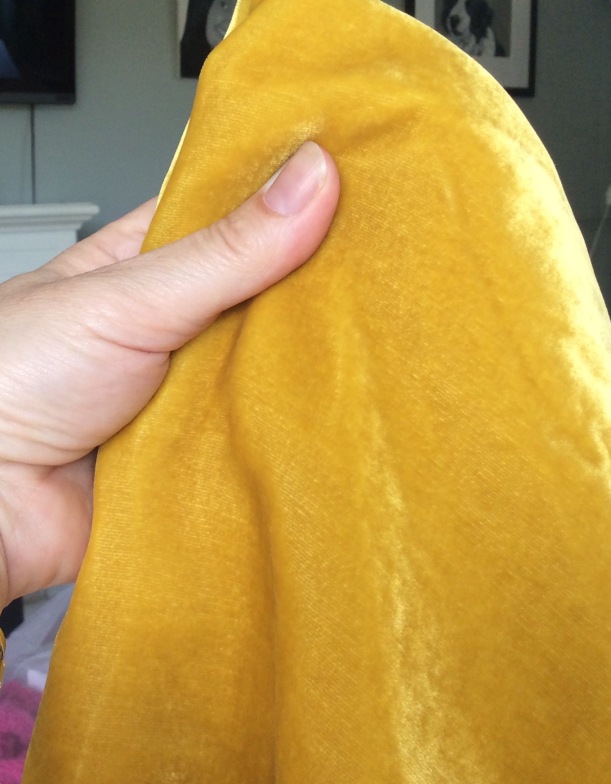 16. Our last night was finished off nicely in The Archduke under the arches near Waterloo station.

17. Cocktails – the perfect end to our anniversary break.

18. On our return the next day, we found that every single one of our hens had been killed by the fox, Cock being the only survivor having a lucky break despite losing all his beautiful tail feathers in the struggle. No.1 Son had brought him in the house to recover, still unsure whether the shock would kill him, too.

19. Lost without his girls, he hobbled around in the garden calling for them – a pitiful sight to behold, poor thing.

So we went straight out and bought some more. 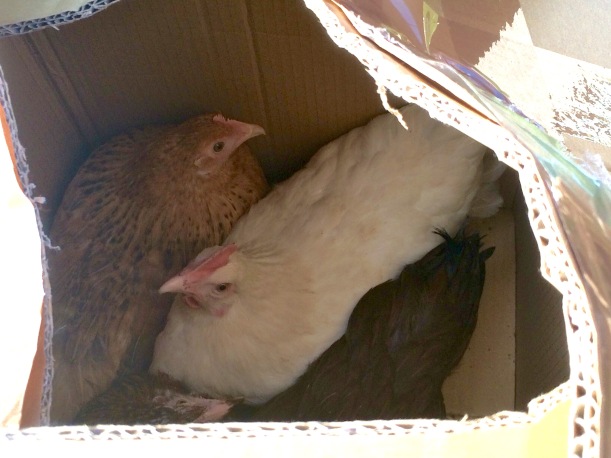 20. Happy as could be with his new harem, he fusses around them within the confines of the run for the time being. The fox was cheeky enough to show her face again last night until I ran out screaming and scared her off, so I’m a bit reluctant to let them free range just yet.

So, after only having lost two hens to the fox over the last four years, it’s time to get to know some new ones. Just four for now, and another four in a couple of months when we’ve made a bigger run. I’m looking forward to getting to know their personalities, although it’s sad and more than a little weird to no longer hear those familiar clucks as the old girls hopped in the back door and wandered around the kitchen.

No eggs for a few weeks either, as they’re not quite point-of-lay, although watch this space as one of them is a Chalkhill Blue and lays blue eggs!

Hmm, it’s 8pm, we have to be up at 3am to travel to the airport, and I’ve just finished sewing my last top for holiday! (This post was scheduled to go live whilst we were away)

Does that sound familiar to anyone, or is it just me?

Back in April I went to Liberty’s London store and bought a metre of this lovely fabric. 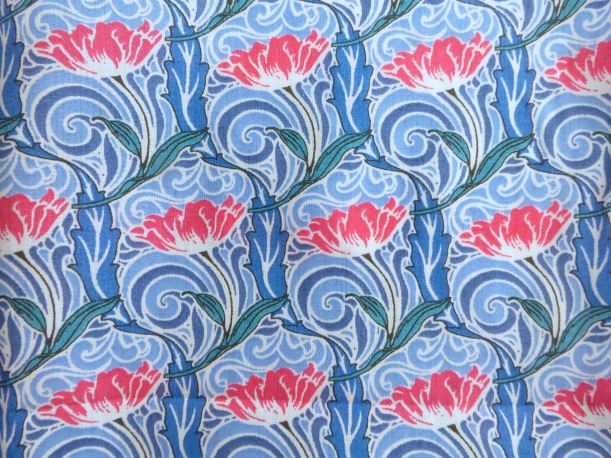 I chose McCall’s 2818, view ‘D’ which is bottom left on the envelope front. 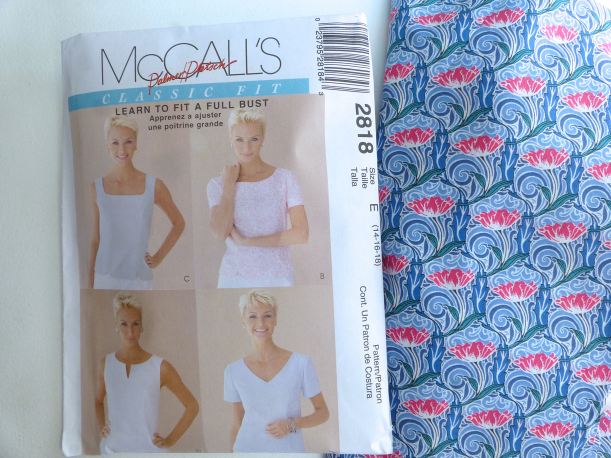 The pattern called for 1.5m of fabric and I had the last 1.10m on the roll, so I knew it was going to be tight, even at 150cm wide. Reading through the instructions first (as you always should!) I reckoned I could get away with it if I used plain white cotton of the same weight to make the back facings. 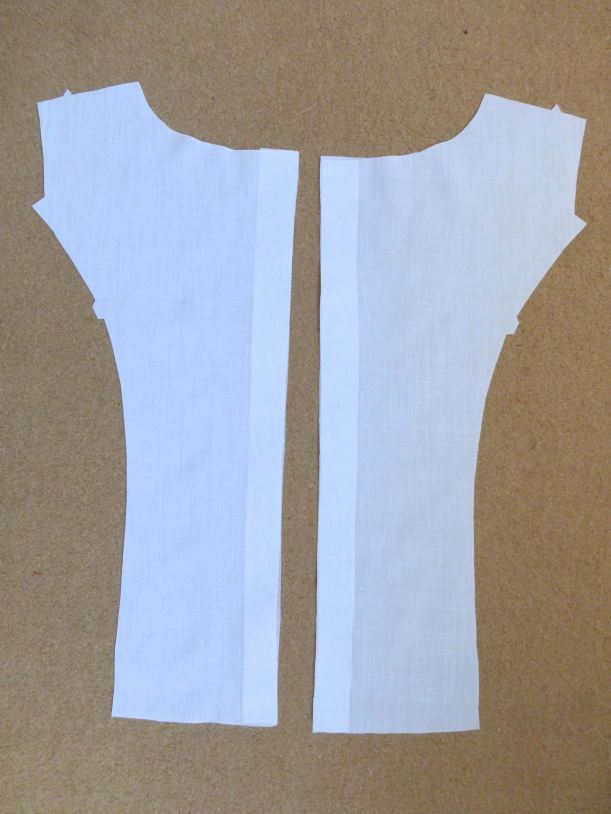 To ensure that the print matched at the hem, I lined all the pieces up so the bottom edges lay on the same line of flowers. I couldn’t match at the side seams as they were all Princess seams and curved. 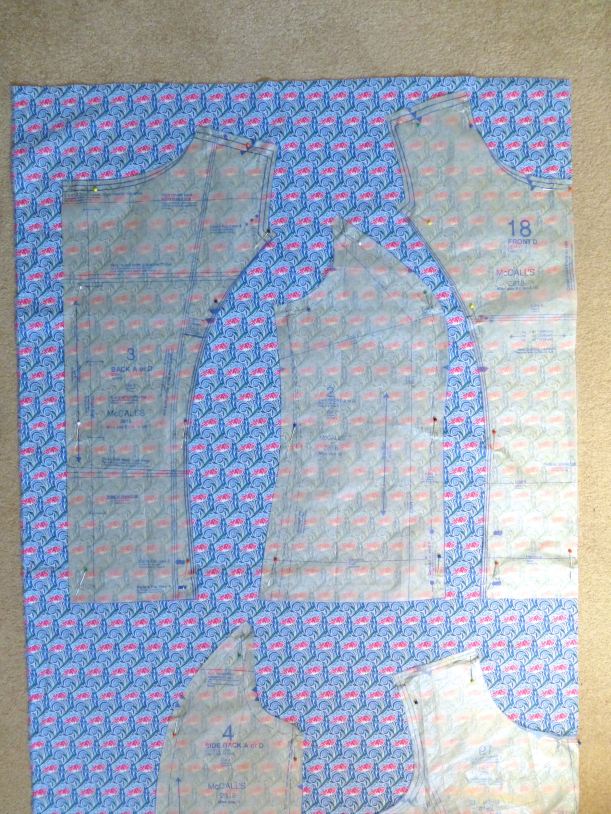 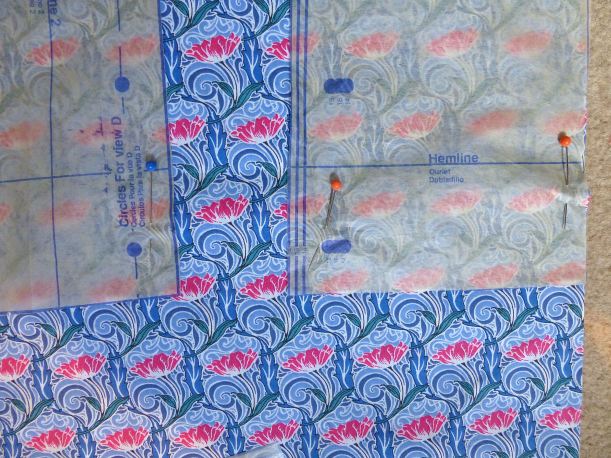 The instructions required full interfacing on all the facings but, as the cotton is very thin, I thought it would be too stiff so I just used a strip around the neck edges and the buttonhole edge. This worked perfectly.

The white cotton was fine as the back facing.

Not as pleasing on the inside as the Liberty print would have been, but it would have cost £12.50 just to buy half a metre to make the back facings – so I figured the plain white cotton would do.

The inside front is better:) 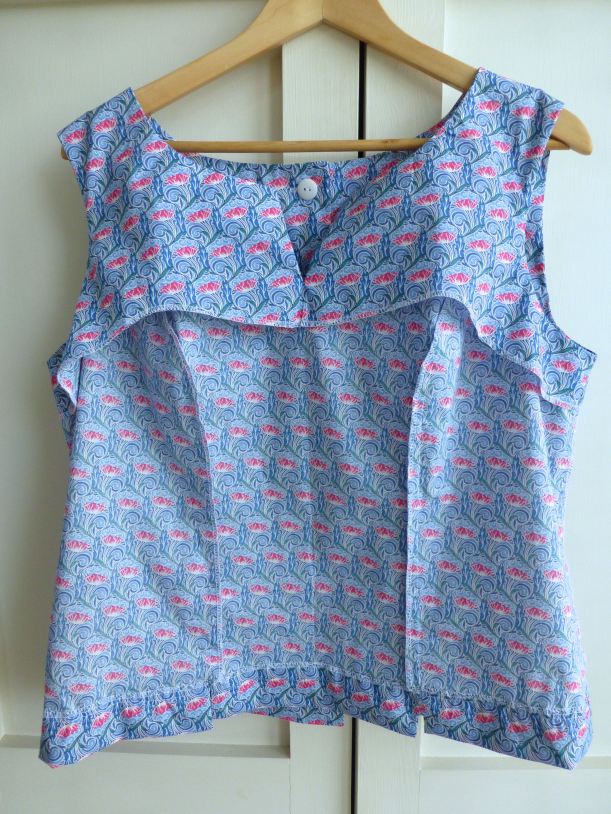 The hem at the side backs and side fronts have a cute little split detail. (Just spotted some thread that needs trimming…) 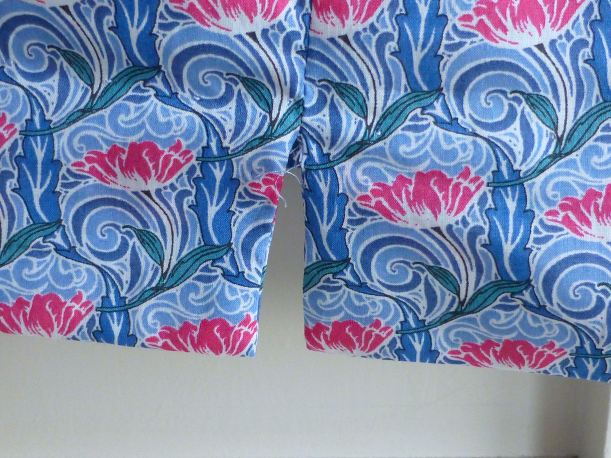 The neckline with its sharp ‘V’ cutout makes a nice change.

Top made, now into my wardrobe to see what it might go with. 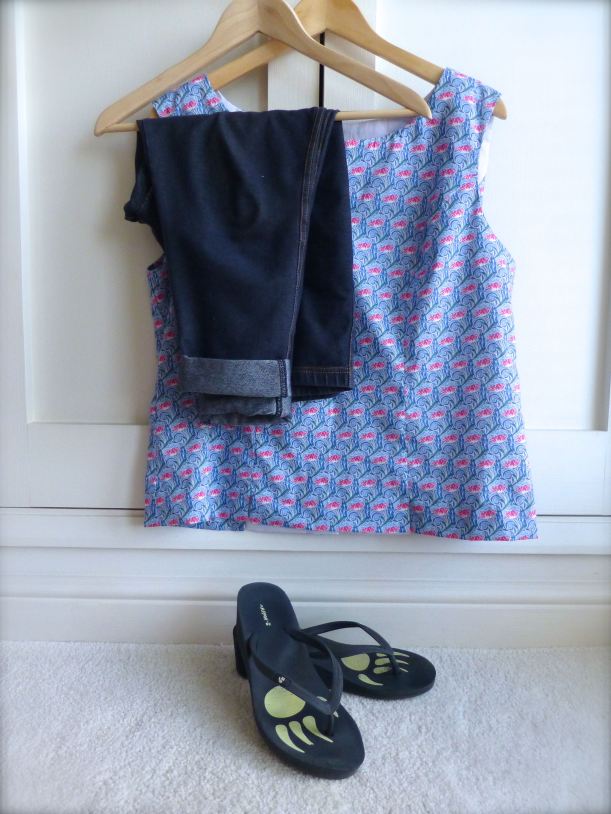 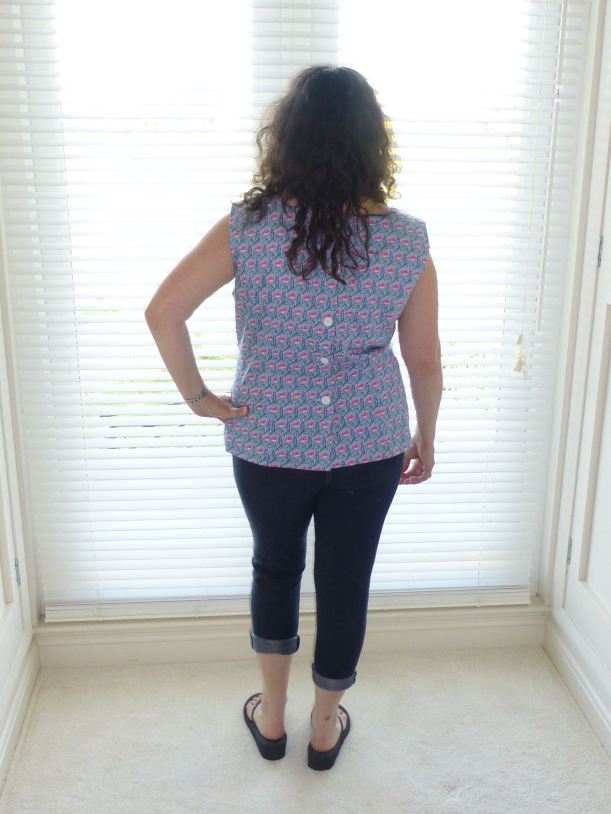 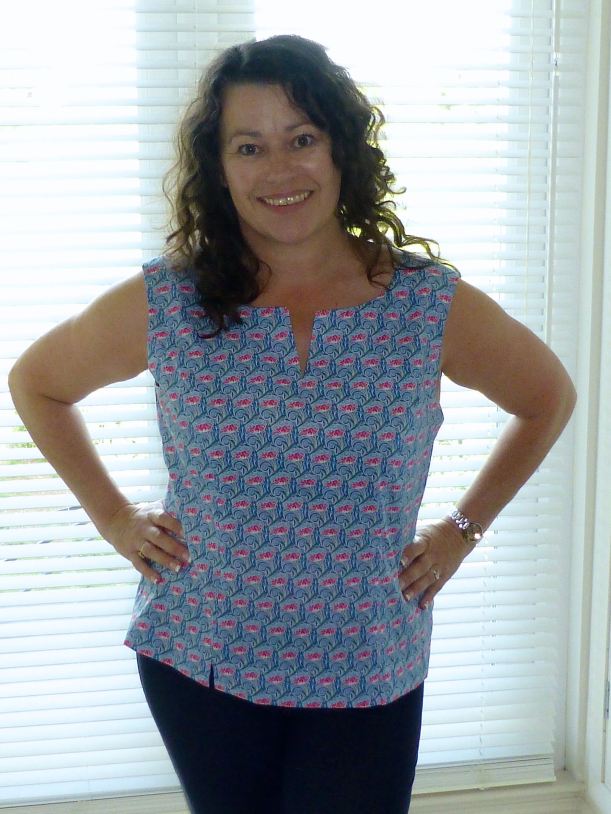 Right, I really MUST start the packing….

A quick round up of my week – the highlight of which was a visit to Liberty’s of London! And, yes, I did spend too much….

1. We did two of the Shaun The Sheep trails around London, this one was spotted in Chinatown. They’re also in Bristol which is closer to home so maybe next week…. 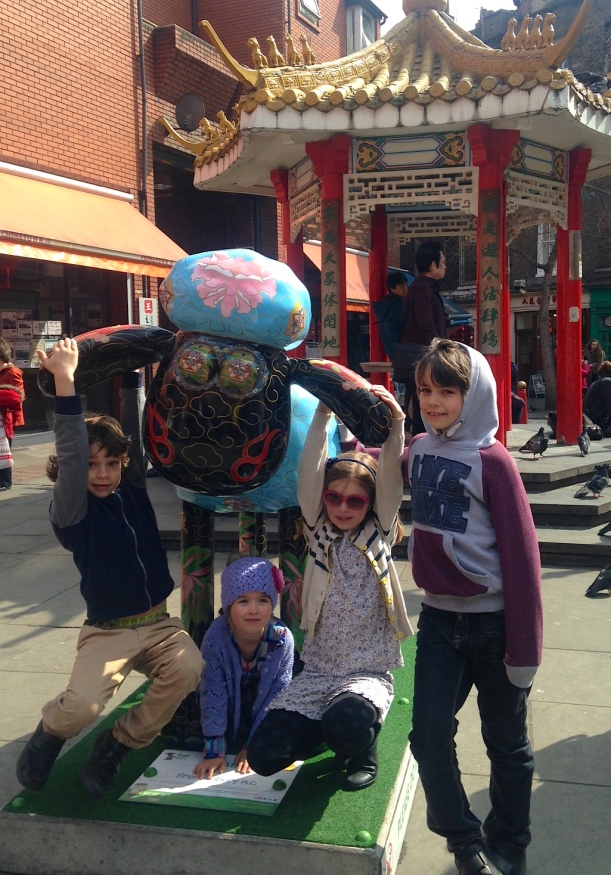 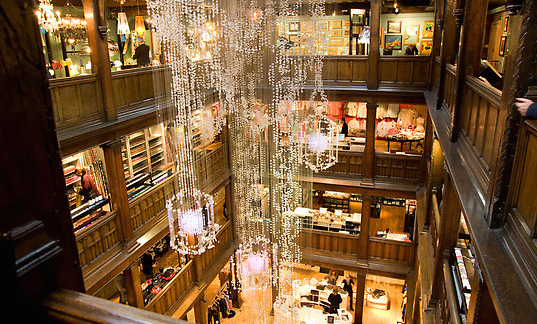 4. I bought a metre and a half of three different fabrics and a ball of Kidsilk Haze to border my shawl.

I plan on making some summer tops or dresses but haven’t decided on patterns as yet. 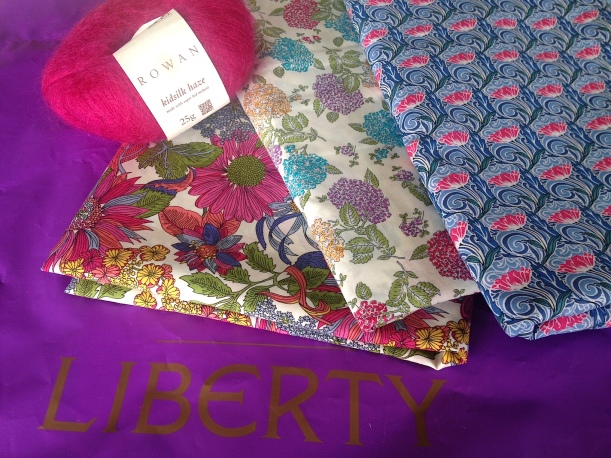 5. My daughter’s unfinished portrait in oils from her artists weekend we bought her for her birthday. It’s going to be good when it’s finished isn’t it?

7. All he did was to move a pile of earth from one part of the garden to another as far as I could tell.

The Boys claimed the spoil as their WW1 trench, erected chicken wire ‘barbed wire’, dressed in camouflage gear and spent a very happy day rolling around in mud. 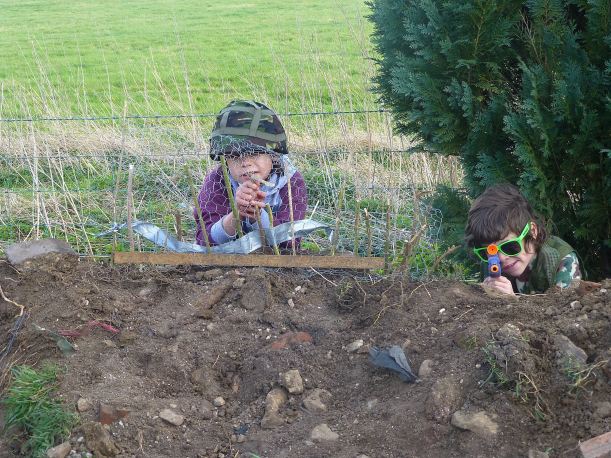 If you want to join in #sundaysevens, you can find out all about it from Nat over at Threads & Bobbins.