A belated Happy Christmas to everyone!

I didn’t get chance to sit down with my iPad in the two weeks running up to Christmas as things were so hectic here, what with hosting for two separate lots of people and with present-making continuing right up to the wire. I also made the decision to wait until the last guests had gone home before opening my two Stitching Santa parcels, which meant resisting the temptation to have ‘just a little peek’ until the 28th December.

The 28th – can you imagine the willpower needed!

Anyway, when the time came, I put on a Christmas film for The Boys to ensure no interruptions, poured myself a large glass of Bailey’s and recovered the last two presents from underneath the Christmas tree.

(Well, last-but-one, as the niece’s boyfriend appeared to have gone home without my noticing that he hadn’t opened our gift.)

At this point in the proceedings, the obligatory festive red dress and sparkly cardigan had been discarded in favour of ‘lounge wear’. But not just any lounge wear, oh no – hubby bought me some Cashmere trousers to go with the waterfall jacket bought previously. So I’m sitting smug, head-to-toe in ridiculously soft Cashmere. And drinking Bailey’s. 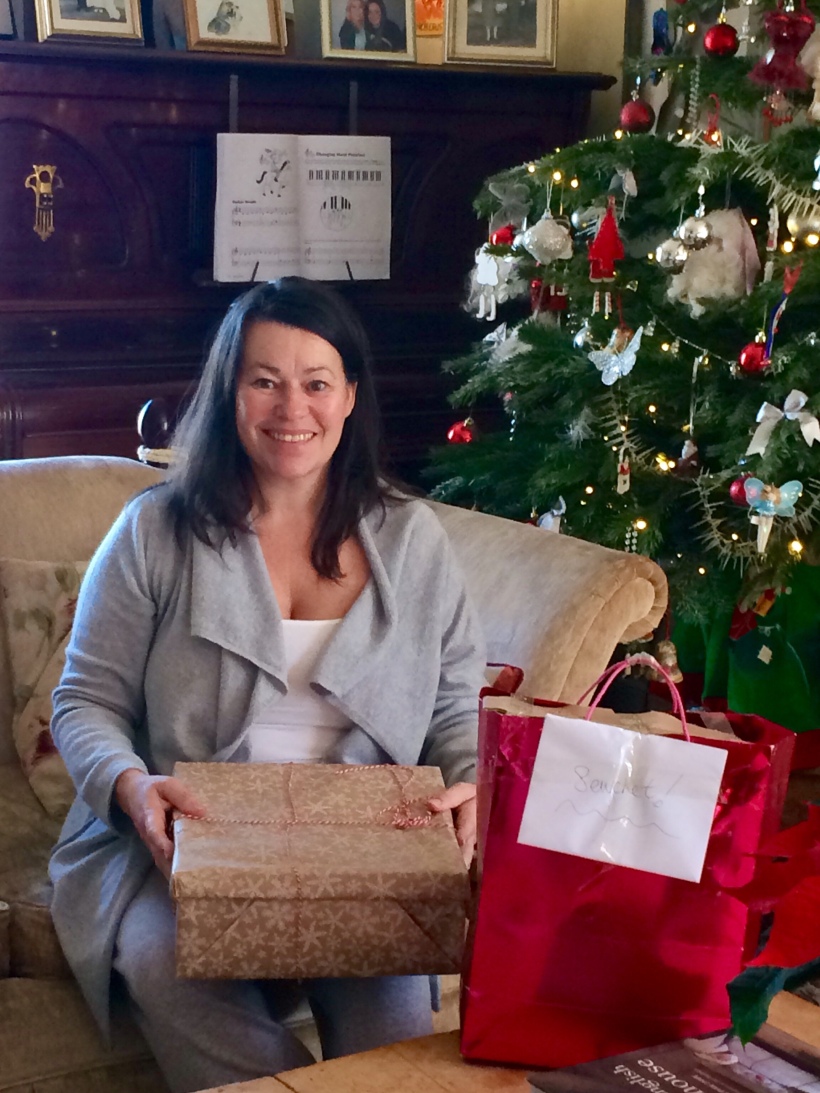 I had already put one of my presents in the fridge as per Bekki’s instructions, so I opened her parcel first – a Yarny one from The Dartmoor Yarn Company.

Beautifully wrapped in snowflake paper and stripy cord, I had already had a quick look when I put the first gift in the fridge a week earlier.

This was the first to be opened and turned out to be fudge made by Bekki herself, which was a godsend as the fudge I had made turned out more like toffee. (I re-named it ‘Fudge Brittle’ and I think I got away with it!). 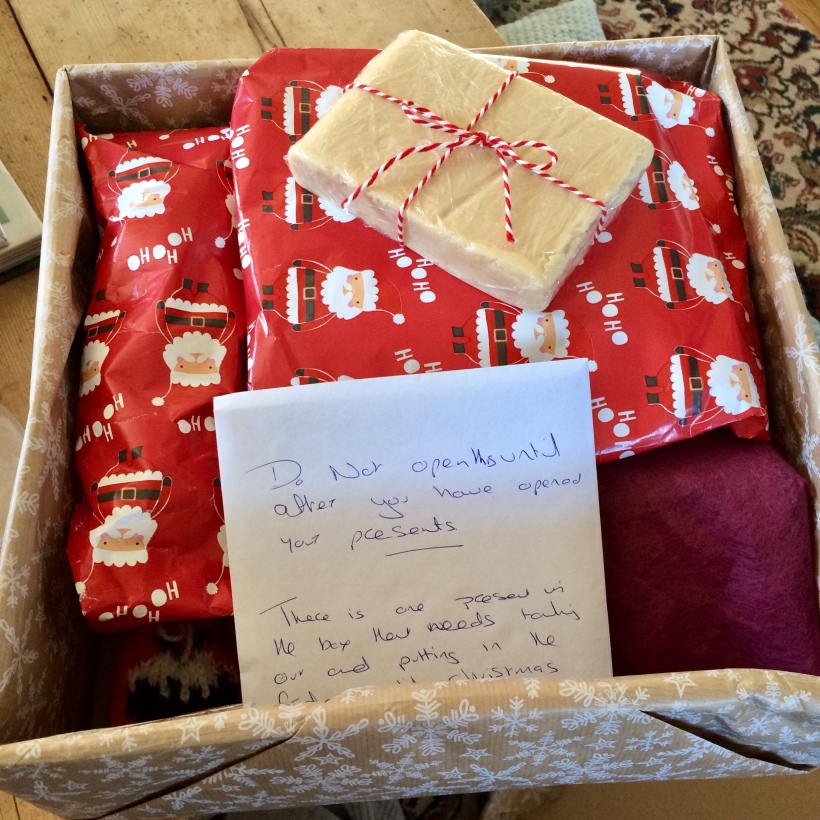 In true DYC style, Bekki had chosen a fab card and letter in with the parcel. 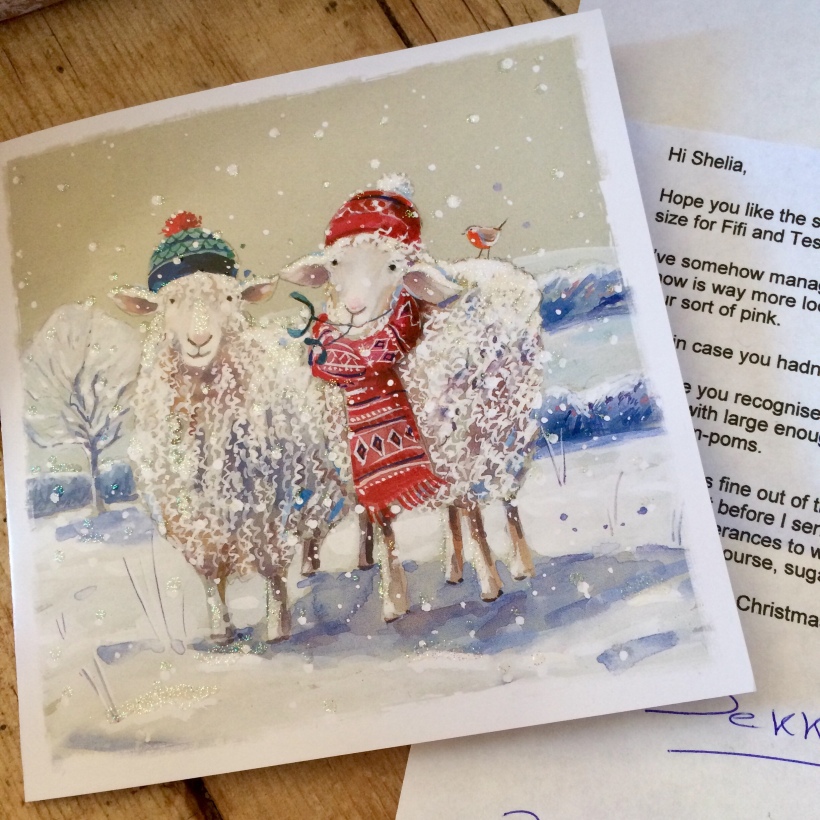 The very next present I unwrapped was my favourite of all – a hand dyed skein of yarn from a company local to me with which I am already familiar; Rosie’s Moments. A self-striping yarn in my favourite shade of fuchsia in what I think is a DK weight.

I have already cast on a pair of socks and it is knitting up beautifully!

One of Bekki’s famous Christmas puddings was next out of the box – isn’t it sweet?

Some wool tops in Christmassy red, green and white will turn into a felted creation or two, when I’ve got my creative head back on.

Bekki even included one of her handmade lavender scented candles – one of my favourite scents! That is going straight on my bedside table as it helps induce sleep. Not that I ever have a problem sleeping (I do love my bed; it’s currently 12.35pm!), but it will smell lovely just before lights out.

Yes Bekki, I did guess it was an egg cosy! 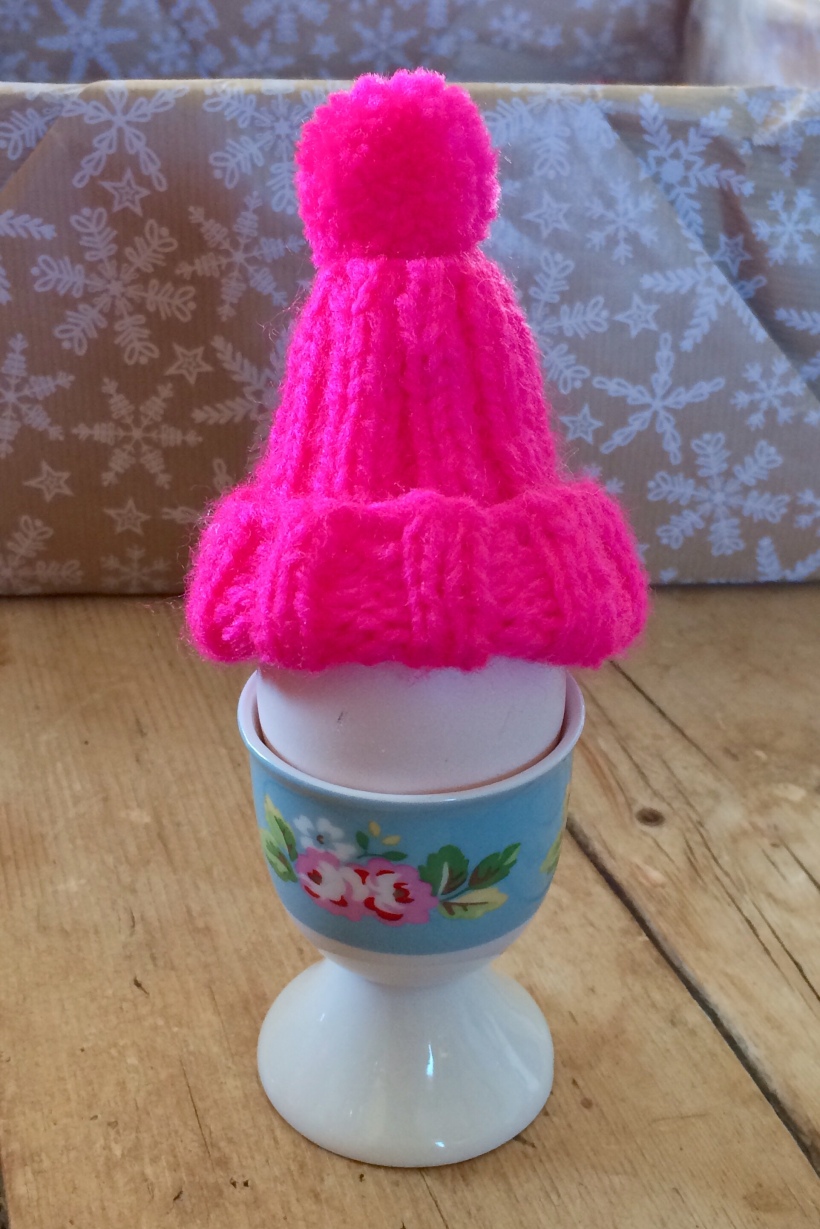 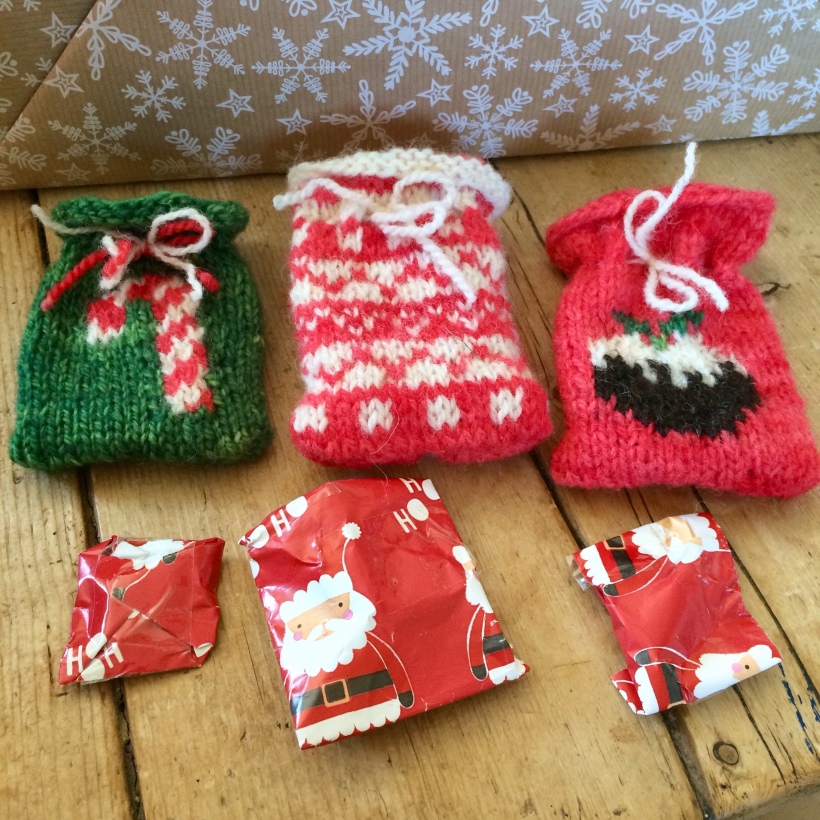 ….knitting stitch markers, already in use on the socks……

…..and the dearest little pearl-drop angel. 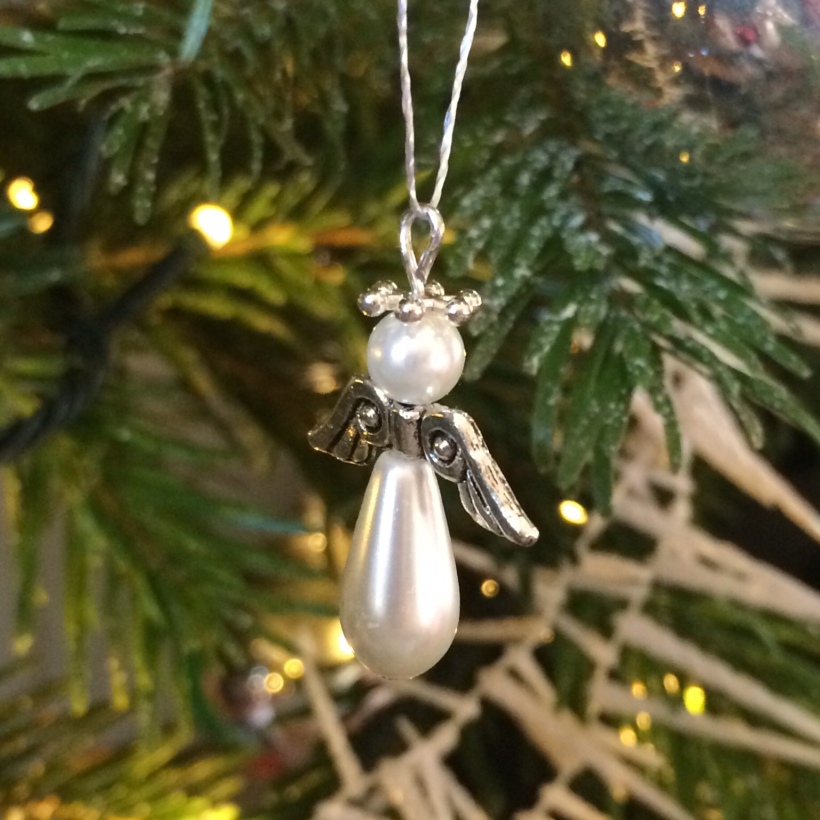 Now I’d unwittingly given my input on the design of this hat, as Bekki had craftily canvassed for opinion on pom poms on her blog, which she dislikes and I love – so the pom poms won out!

Despite concerns about exploding pom poms, mine are perfectly intact, as you can see. 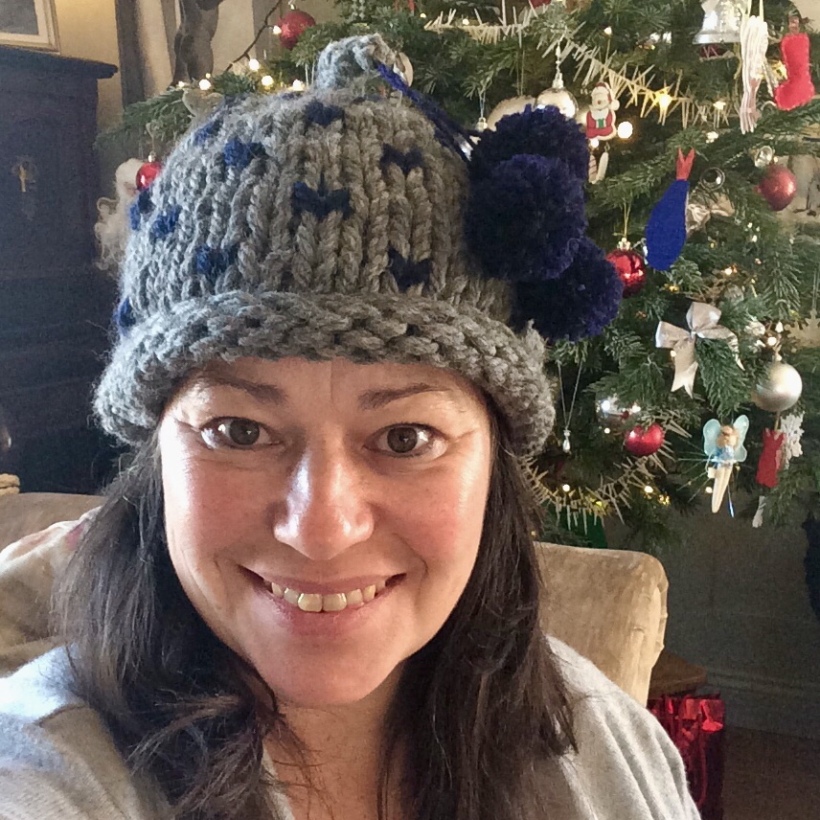 Even The Dogs had a gift each of identical bandanas. Fifi wears hers holly side out….. 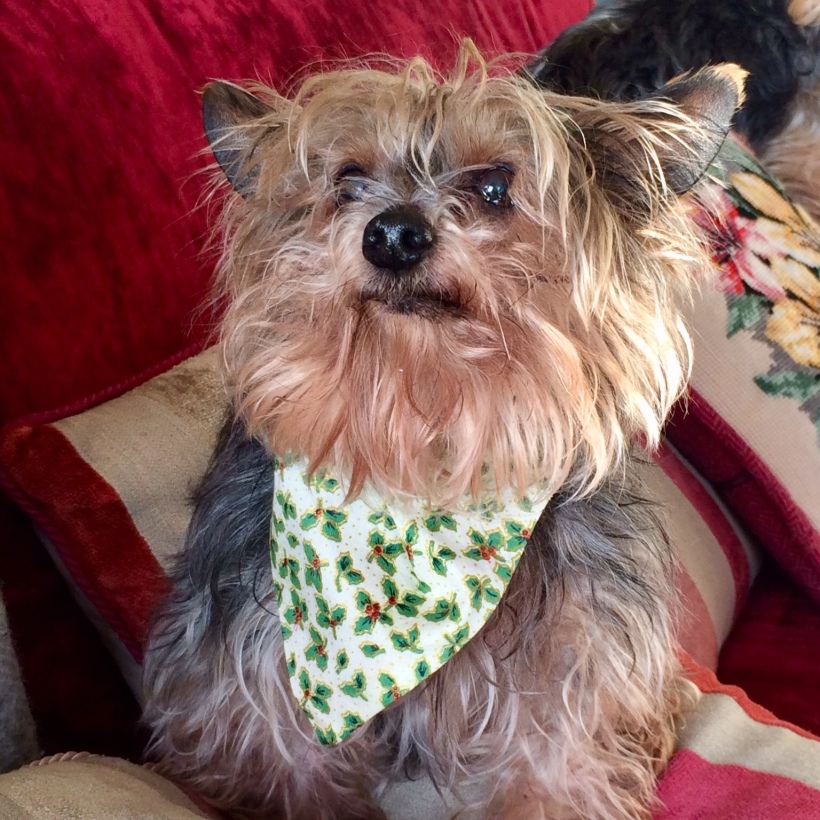 …and Tess wears hers tree side out. They both posed obligingly for the photos:)

And here it is all together!

Thanks SO much Bekki – I love everything and you got me spot-on. The thought that has obviously gone into my parcel is immense and all those handmade extras are a joy which I will treasure.

Now to get back to those socks…….

27 thoughts on “Stitching Santa Part One”