Sunday Sevens is a weekly blog series where you share some moments from outside your blog. You can find out more about how to join in at Threads & Bobbins.

1. My niece is at University so I sent her some money for her birthday (seeing as she is now a poor student!). I wanted to give her an actual present to open as well, so I knitted this bobble hat. 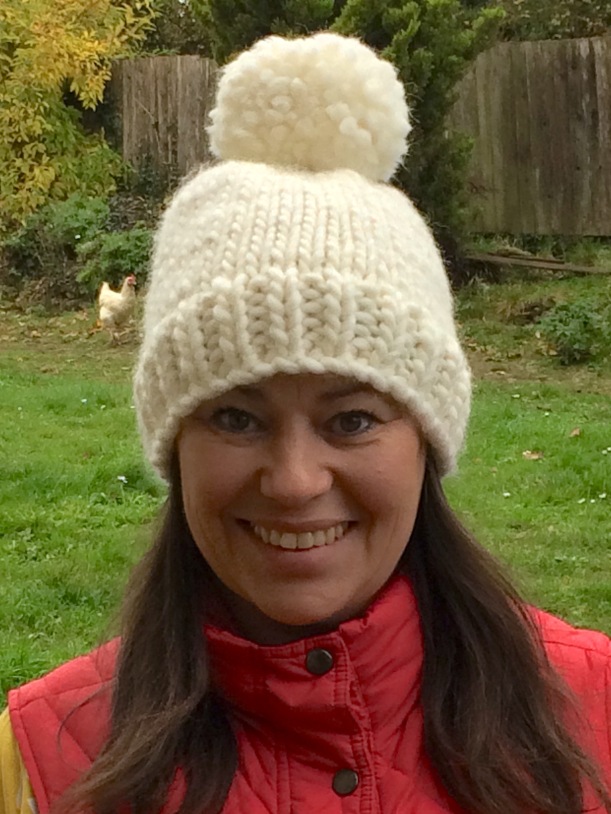 2. I’ve been working on Christmas gifts this week and have started (and finished) quite a few. This will become a pointless-but-fun dog bandana. Because all dogs should have one.

3. A couple of hours were spent on a bit of fair isle knitting in Christmassy red and white.

4. This is the finished thing – a cute little stocking which will go into my #stitchingsanta parcel, the first thing I’ve made as yet. The pattern is a free one by Julie Williams on Ravelry and one I wanted to make last year but didn’t have time. Hopefully, I’ll have time to make some more because they are a joy to knit and quick, too.

5. Talking of #stitchingsanta, this skein of lace weight baby merino wool is also destined for my recipient. 470 yards should be enough to knit a shawl. I was drawn in by the lovely Autumnal colours and can’t wait to see it made up.

6. My Winter “selfish knitting” project – a Sunday jumper, for lazy days at home. (I’ve practically lived in my Stag’s head dress since I made it!) 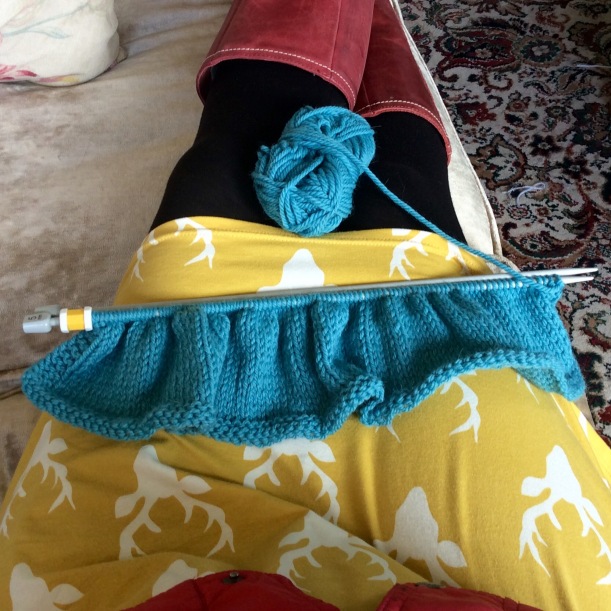 7. I borrowed this pattern from my sister in law and am substituting with Drops Nepal, 65% wool, 35% alpaca for softness as the recommended Debbie Bliss Cashmerino was too expensive! 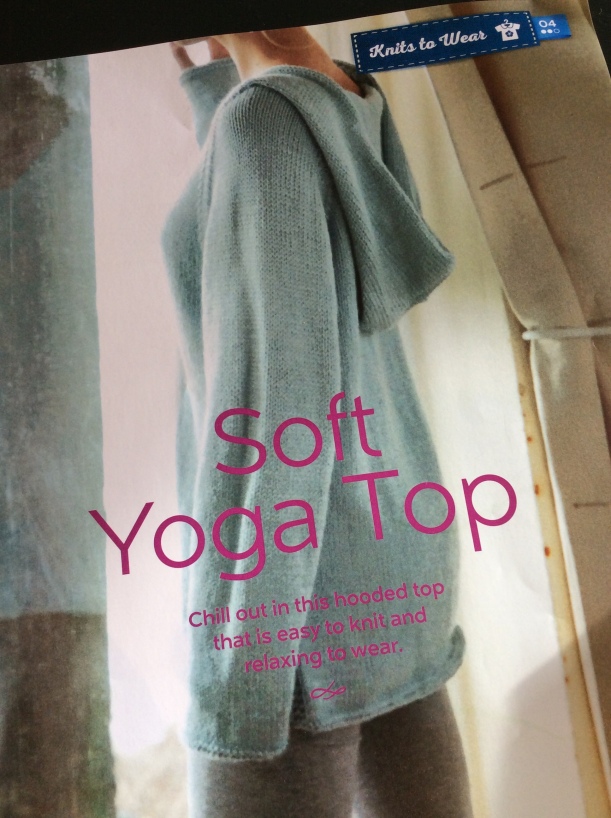 8. I waved goodbye to Mr H-L at 8am this morning, as he is off to London with a 7.5 tonne truck to clear his parent’s flat which has now sold. Sad times, but time to move on. 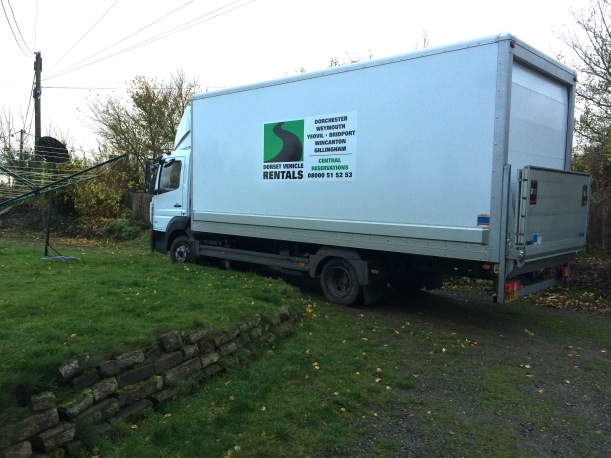 9. Ending on a cheerful note – Fifi turned 14 and had a birthday haircut. She didn’t stop shivering the first day, so I nipped out and bought her a festive jumper to keep her warm. She loves it and hasn’t shivered since. And looks totally adorable, to boot!

1. Woke up to another beautiful frosty morning – this is the view through the French doors from our bed.

2. We went to a Christening – the baby slept through being baptised and The Boys were given sparklers by the vicar!

3. The shawl has been sent to its new owner at last! I will do a short post on it in the next couple of weeks but, suffice to say, it was very well received, thankfully. 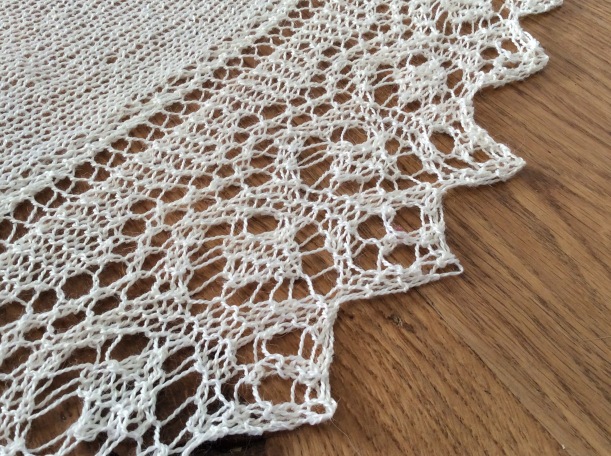 4. Mr H-L and I went to Clark’s Village to buy him a new piece of cabin luggage for his regular business trips to Amsterdam and, obviously, we had to have lunch whilst we were out.

5. Lunch was fabulous……..but not as amazing as my other purchases:)

6. A fun shot of one of my kids’ sewing classes – yes, we really do have that much fun!

7. Another Christmas commission was completed and sent across the pond to the USA.

8. I found time to help Mum with a commission that she was struggling to find the time to do – a personalised cushion for a baby girl. Definitely girly, but not too babyish, I think.

9. You can’t tell, but this is me having a G&T in our local pub. Fifi likes to sit on a coat on a stool and watch the world going by out of the window.

10. I had some leftover Stag’s head fabric from my Minerva Craft sponsored project and made a cute little hat and leggings for our granddaughter for Christmas. Can you tell that I’m a bit of a stickler for pattern placement?! 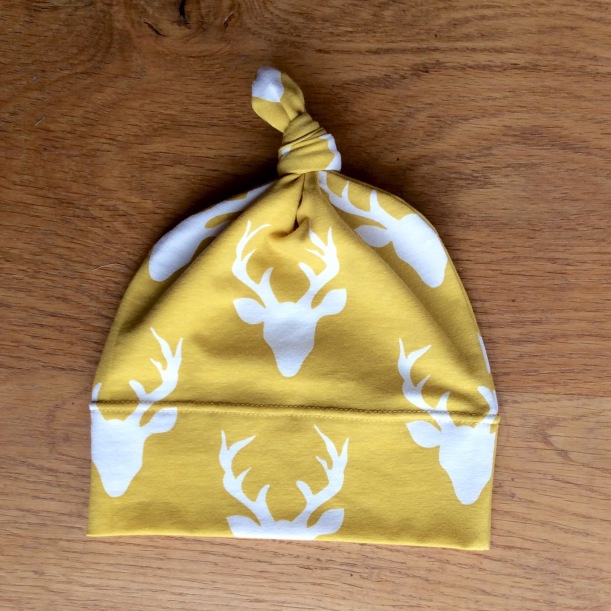 11. We went to stay with my brother for the weekend and missed the Remembrance service so watched it on TV instead. This is a photo of our local church in its Autumn dressing. I know – random.

Sunday Sevens is a weekly blog series thought up by Nat at Threads & Bobbins, in which anyone can join. Visit her blog to find out more.

Linking up with Nat over at Threads & Bobbins for another #sundaysevens – a blog post containing seven (in theory) photos of your life outside the blog.

1. Had a cosy breakfast with No.1 Son who was working from home. 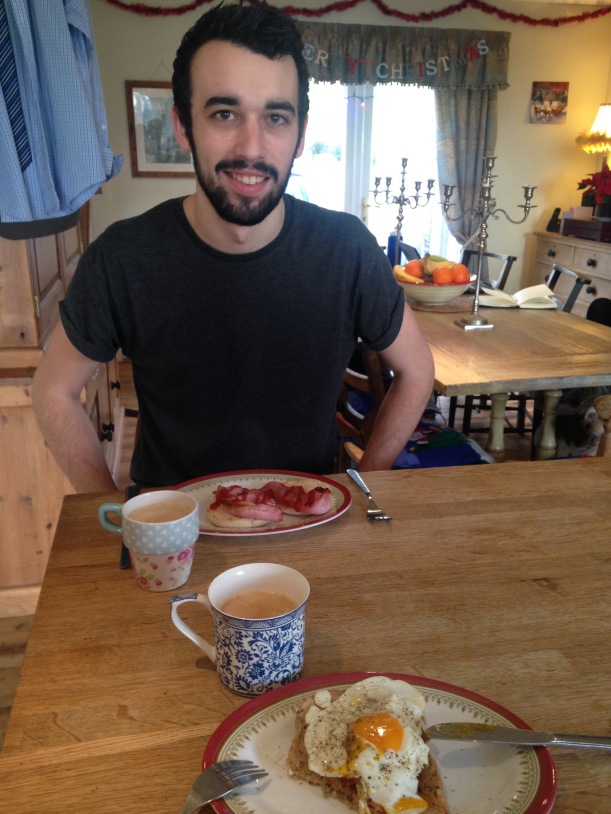 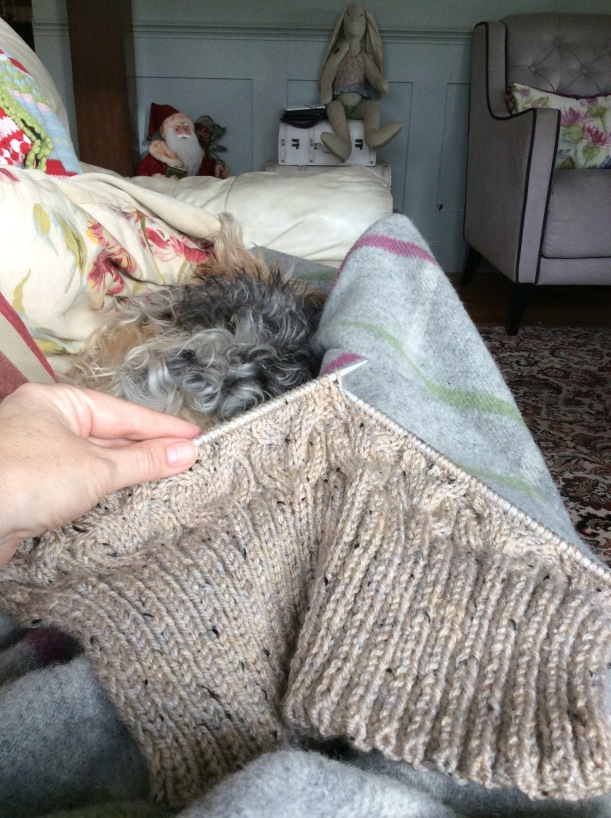 4. I like to make samples in advance of a project for my students to show them what they will be making next and how they can make it individual to themselves. I chose a patchwork cotton and trimmed it with some vintage lace from my stash.

5. I managed to track down another Janome 3300 to match the other three in my sewing school. They were discontinued (and therefore discounted) at the time, and I could only get three. I have been hoicking mine down from my sewing room for each class, which has been a right royal pain in the bum.

6. My latest project for the Minerva Crafts Blogger Network – a bottle green crushed velvet coat with dark red Paisley lining and horse head buttons. Nothing run-of-the-mill about this! 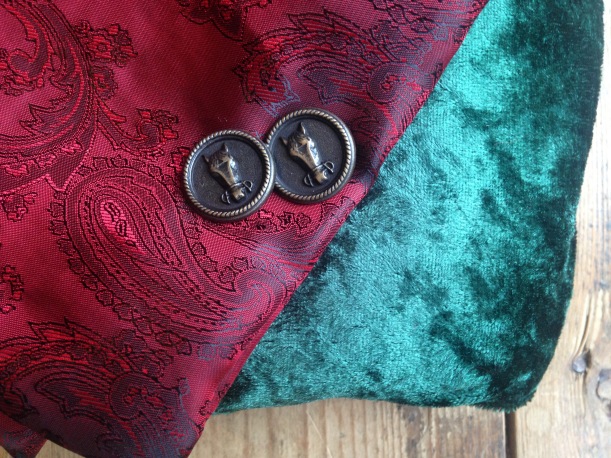 7. His niece from Hong Kong sent my father-in-law a sensory activity cushion designed for dementia sufferers, specifically tailored to his interests in which music played a huge part. 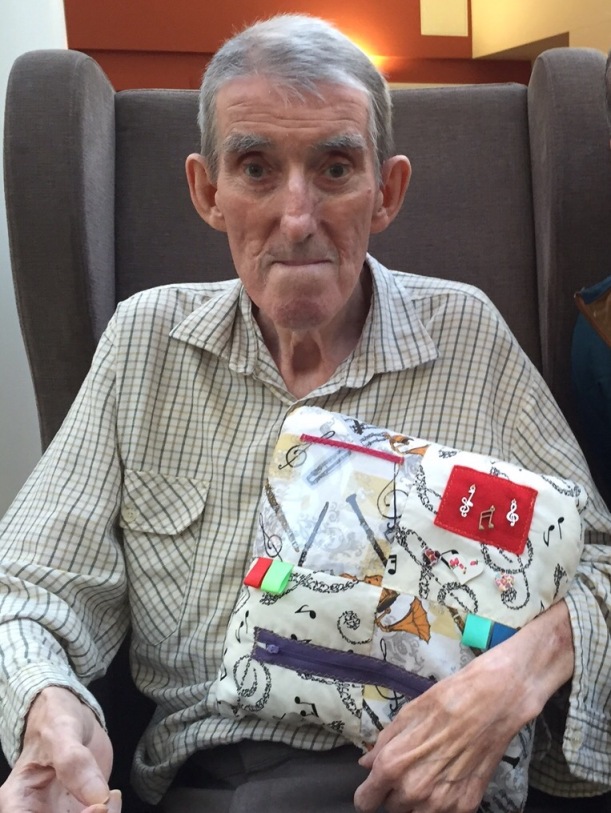 8. Took the family out for a meal to celebrate No.1 Son’s 23rd birthday (top right with the beard). 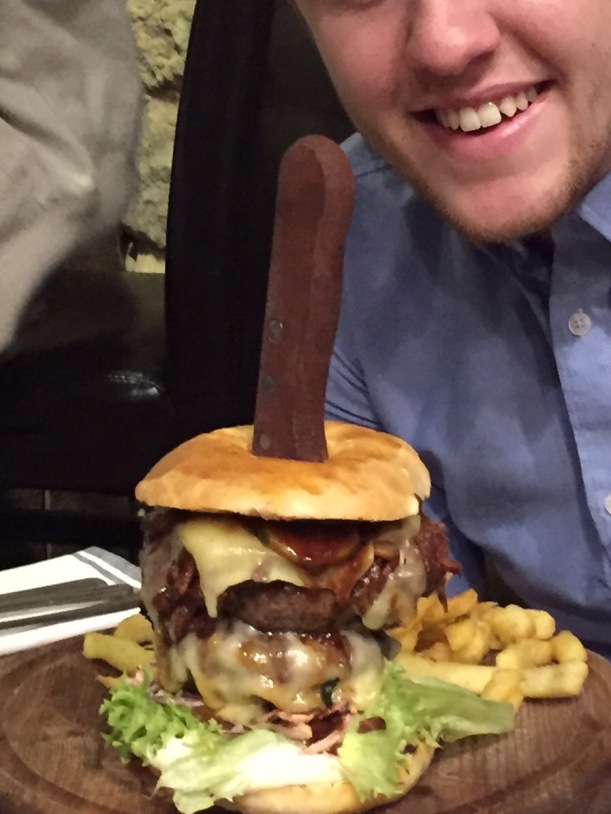 10. No.2 Son got tired. Luckily, daughter was wearing a blanket scarf and N0.3 Son brought his cowboy hat with him. Don’t ask.

11. Uncle T was over from France so they all went to watch the latest Star Wars yawn film.

12. I would rather eat my own liver than suffer even five minutes of Star Wars, so I spent a lovely couple of hours listening to La Traviata whilst cutting out my coat pattern in front of a roaring fire. Heaven!

Oh yes, nearly forgot to mention that I’ve also bitten the bullet and joined the Instagram revolution as “Sewchet” – come and say “Hi” if you like:)

I don’t know whether it’s an age thing or not but the older I get, the more I feel the need to “give something back”.

What that means, I’m not quite sure but I find myself drawn towards charities and happily dive into anything that involves helping a cause.

I’m well aware that, in common with the majority of Brits, we are a charitable nation – I, for one, cannot pass a volunteer shaking a charity box in the high street or outside the supermarket without rummaging through my purse to empty all my spare change into it.

I give to various charities on a monthly basis via standing orders and yet I still feel as if I could do more, after all, my monthly donations whilst regular, are not massive amounts of money.  Donating cash is rather an easy option and, self indulgent though it sounds, is not actually that satisfying!

When I found out about #knitforwinter campaign organised by Sunrise Senior Living, I jumped at the chance to get involved. Just look at this shocking statistic: –

Each winter, 1 older person dies needlessly every 7 minutes from the cold – that’s 200 deaths a day that could be prevented.

Sunrise Senior Living have got together with a community of volunteer knitters who knit hats, gloves and scarves which are donated to age charities. These charities will take the donations and sell them in their stores to raise money to deal with issues such as the elderly not being able to afford to put on their heating in the cold.

Although this Winter is nearing an end, they are looking for more willing knitters to join in and give a head start to next Winter’s campaign.

This is how it works.

Visit the Knit For Winter campaign page and let them know you would like to offer your knitting skills.

You get to choose exactly what you would prefer to knit according to your level of expertise (or not, as the case may be!). There are projects for very basic scarves in garter stitch suitable for beginners, through to more complicated infinity cowls in a fancy Brioche stitch for the more experienced knitter.

I settled on a simple bobble hat pattern which promised to be quick to whip up in super chunky yarn, but interesting enough to not get bored whilst making it.

The really clever part is that you are sent absolutely everything you will need to complete the project, including needles, so you don’t have to worry about anything other than the knitting itself.

Return postage is also included – you just return the entire kit with your finished item in the same box it arrived in.

My yarn was a lovely shade of maroon and the needles were a large 9mm. I found the plastic a little sticky for the acrylic yarn to begin with as I personally am used to knitting on metal needles, but can understand that they must be a lot cheaper to send out so it was an insignificant inconvenience really.

The hat knitted up in a couple of evening sessions spent catching up on a few of the many re-runs of “Poirot” that have been languishing on our Sky hard drive for a while now.

Instructions are given to make the pom pom bobble the traditional way, with two card circles.  However, I have this handy little gadget that is vastly quicker and simple to use and made the perfect sized pom pom suggested by the pattern.

I thought I’d better model the hat to give you an idea of what it looks like on….. 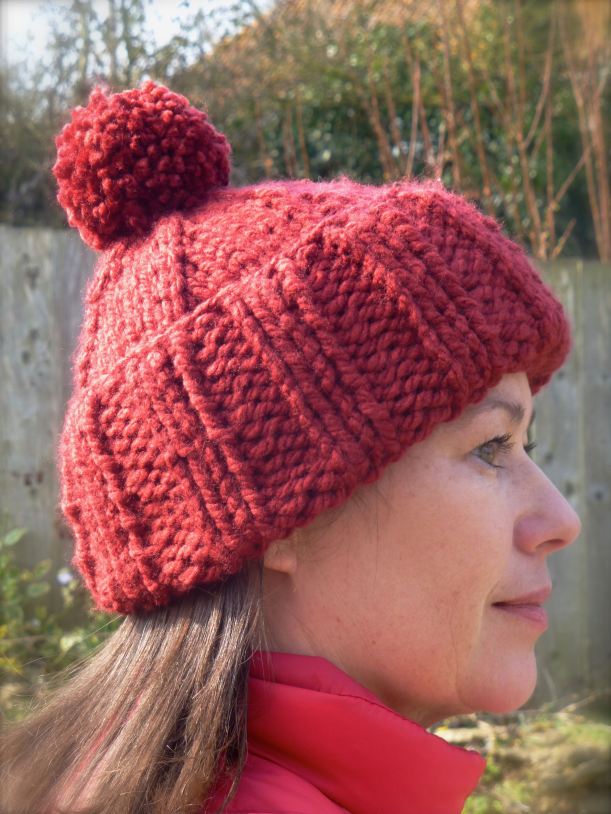 The large band of ribbing turn-up makes a cosy double layer of snugness for extra warmth.

Oops, the centre back seam could have been a little neater but hopefully the shaping detail of the crown draws the eye away successfully!

So come on, hop on over to Sunrise and give a little something back yourself – it doesn’t cost anything but your time and you can do something constructive to help whilst watching Strictly on a Saturday night!